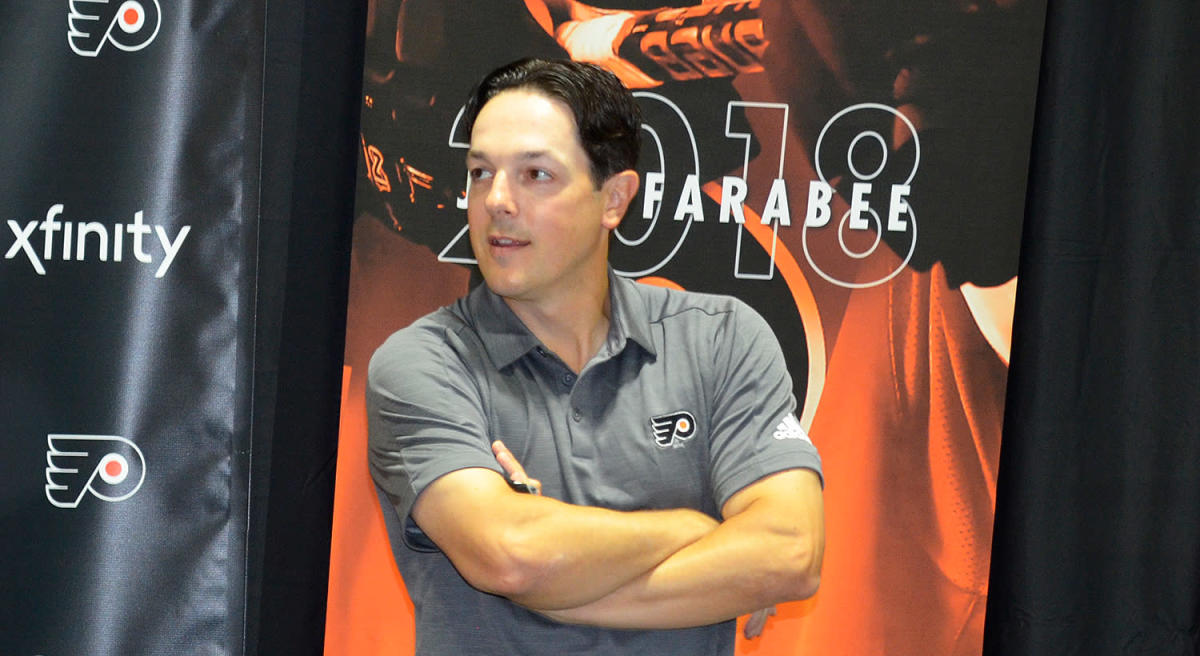 Danny Briere is a favorite among Flyers fans.

He’s a popular guy in hockey circles, too.

Briere has become more and more involved within the Flyers’ hockey operations department. He worked with players on the ice during rookie camp, he led rehab skates for Ryan Ellis and Kevin Hayes, he was behind the bench for AHL affiliate Lehigh Valley in a game last month and “sat in pretty much every big meeting” the Flyers have had over the last two years, general manger Chuck Fletcher said.

The former Flyer is versatile and smart. The 44-year-old, who was a candidate for the Canadiens‘ recent GM vacancy, is viewed as an up-and-coming hockey executive and the Flyers value his sense for talent evaluation.

At a home game late last month, Briere was sitting in the Flyers’ hockey operations suite between assistant general managers Brent Flahr and Barry Hanrahan. He was in the suite Tuesday night among the Flyers’ brass for the club’s 3-1 win over the Jets.

According to a source, over the past couple of years, the Flyers have had Briere in pro and amateur scouting meetings, along with his involvement with player development. He’ll continue to carry out his duties as president and governor of the ECHL’s Maine Mariners, but per a source, the Flyers will have Briere assist in some special assignment scouting and eventually amateur scouting after the March 21 NHL trade deadline. Moving forward, Briere will likely focus less on the player development side and help the Flyers more on the personnel side.

“We’ve had a lot of good conversations with Danny,” Fletcher said a week ago. “Certainly during the process when he was interviewing with Montreal, we were communicating a lot, Brent and I were trying to help a bit. It was a great opportunity for Danny.

“Obviously he’s been president of the Maine franchise. A couple years ago, in the 2020 draft, Danny looked at a lot of the potential first-rounders and worked with Brent on kind of that area we were looking at when we drafted Tyson Foerster, so he’s been involved then. He’s been involved with player development this year. He’s been on the bench with [Phantoms head coach Ian Laperriere]. I think moving forward here, he’s going to have a much bigger role in hockey ops.”

Briere was known for being clutch in big moments as a player. As a 5-foot-9, 174-pound forward, Briere put up 116 points (53 goals, 63 assists) in 124 career NHL postseason games. With 37 goals and 35 assists in 68 playoff games for the orange and black, Briere has more postseason points in a Flyers jersey than Tim Kerr, Reggie Leach, Eric Lindros, Rod Brind’Amour, Eric Desjardins and Dave Poulin — all Flyers Hall of Famers.

Knowing what goes into performing well under pressure is crucial in player evaluation.

“He’s a guy, to me, that is great, obviously knows the game, played the game, great personality, very good evaluator of players and I think there’s a lot he can add to our group,” Fletcher said. “He has been involved in a lot of the decisions. … I’ve enjoyed working with him and hopefully something that can transition to even a bigger role with us going forward.”

Briere has also been a resource to the Flyers’ coaching staff. Despite being knowledgeable, Briere, from many accounts, likes to listen and learn.

“Danny’s been nothing but an unbelievable pro and person any time that I’ve been around him,” Flyers interim head coach Mike Yeo said Monday. “I’ve got a ton of respect for him. He’s worn many hats obviously but he’s got great information, he comes down to the coaches’ room, he’s a guy that listens, he’s guy that wants to know kind of what’s going on, but at the same time, he’s very insightful with some of the things he shares. He’s been nothing but amazing any time that I’ve had to deal with him, that’s for sure.”