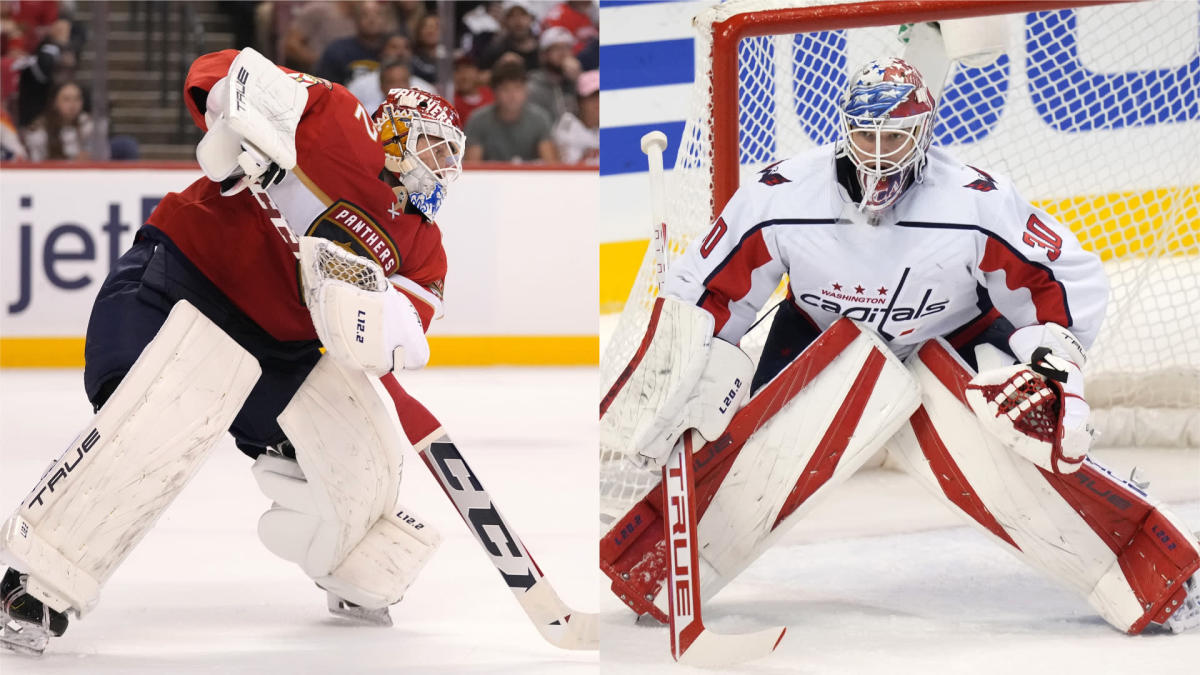 The Capitals blew a 3-0 lead in a 5-3 loss to the Florida Panthers in Game 5 on Wednesday as some sloppy defense by their blue liners put Ilya Samsonov in precarious positions all night.

Sergei Bobrovsky continued his trend of shining late as he held off a barrage of shot attempts by Washington with its net empty in the final minutes of the third period to earn his victory.

Here’s how the goalies fared in Game 5.

Samsonov put together a spectacular first period, stopping all 15 shots the Panthers fired at him. He seemed on his way to another strong outing when he entered the break with a .957 save percentage for the series that included just one five-on-five goal allowed.

Then all hell broke loose in the second. Washington jumped out to a 3-0 lead four minutes into the period, but the Panthers started clawing their way back three minutes later. Aleksander Barkov fired a shot wide of the net that bounced off the boards behind the goal and set up Carter Verhaeghe for the quick strike.

Samsonov couldn’t move to the other side in time as Verhaeghe slapped the puck in behind him for his fourth goal of the series.

Carter Verhaeghe stays hot and scores the first goal of the game for the Panthers!!!

The Capitals then saw John Carlson make an ill-advised aggressive play on the puck, allowing Patric Hornqvist to get free for a clean breakaway. Hornqvist took his time locating his shot before firing a wrister top shelf over Samsonov’s glove-side shoulder.

Another two minutes went by before the Panthers were once again in the attacking zone. They created a scramble for the puck just in front of the crease and none of the Capitals’ five players in the area could knock it out.

Samsonov had an opportunity to jump on it but opted instead to stay in position, which ultimately cost him when Sam Reinhart leapt into the mix and scored. The Capitals’ 3-0 lead had evaporated just like that.

Things got no better for the Capitals in the third as Verhaeghe struck once again. Only three minutes into the period, he stripped the puck from Dmitry Orlov and passed it up the ice for Barkov in transition. The center waited until Verhaeghe got into position then fired a pass between two Capitals that he tipped past Samsonov for the go-ahead goal.

Samsonov hung in there, facing a total of 38 shots on the night. Some more bad defense by the Capitals allowed the Panthers to put the game away with a 3-on-1 that resulted in a Claude Giroux goal.

His defensemen did him very few favors, but Samsonov finished with five goals allowed in a game that saw the Capitals blow a 3-0 lead. Head coach Peter Laviolette will have a decision to make between Samsonov and Vitek Vanecek, who started the first two games of the series, for Game 6.

Whoever does take the net will do so with the Capitals’ season on the line.

While the Panthers outshot Washington by a healthy margin in the first period, the Capitals kept Bobrovsky busy by leading the way in high-danger attempts.

The Florida goalie’s first significant challenge of the game came about four minutes in. Nick Jensen set up Marcus Johansson in the low slot with a quick pass across, but Bobrovsky tracked it well and adjusted his positioning in time to swallow it up. Carlson also nearly scored with a deep shot that ricocheted off the pipe and out of play.

However, the Capitals didn’t wait long to get on the board. Carlson fired a slapshot from the blue line that T.J. Oshie deflected in midair — something he’s making a habit of in this series. Bobrovsky’s glove was in the right place to catch Carlson’s shot, but Oshie knocked it through the seven-hole for the score.

Washington stayed hot early in the second period, scoring a pair of goals in quick succession to grab a 3-0 lead. The first one came on a rebound off a Lars Eller slapshot. Bobrovsky did well to stop Eller’s shot, but he let the puck fall in front of him and Justin Schultz took advantage.

The Capitals scored again 80 seconds later when Connor McMichael made a heads-up pass to give Oshie and Evgeny Kuznetsov a 2-on-1 opportunity. Kuznetsov waited until Brandon Montour made an attempt at the puck before passing it over to Oshie, who fired it quickly to beat a helpless Bobrovsky.

Bobrovsky then put on the clamps, though the Capitals weren’t exactly making things difficult for him. Washington managed just eight shots on goal between the 10-minute mark of the second period and when they pulled their goalie with three minutes.

Yet just like Game 4, he came through when the Panthers needed him most. Bobrovsky made seven saves after Samsonov was pulled, ending any chance of the Capitals climbing back into the game. He finished the contest with 30 saves on 33 shots as he claimed a much-deserved win on home ice.

All first-round games of Capitals vs. Panthers will be available regionally on NBC Sports Washington and streamed live on the MyTeams app.

WATCH: Kyrie Irving recounts how Kobe Bryant helped motivate him in 2016 NBA Finals and through injuries