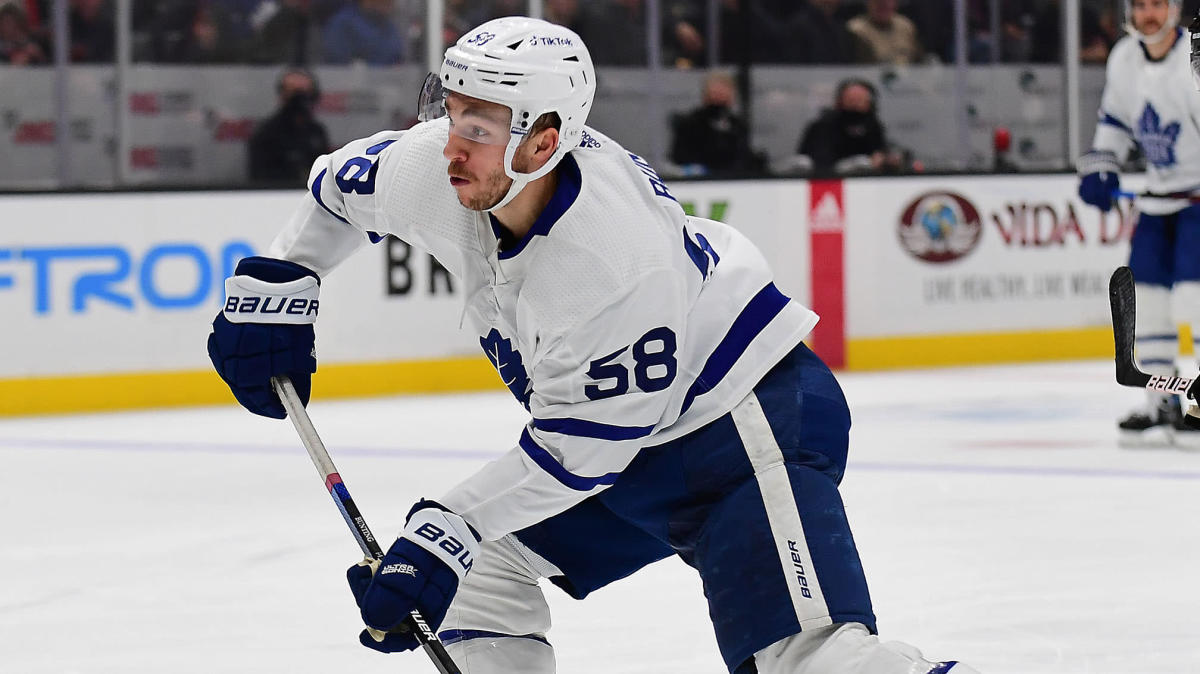 Michael Bunting netted his first hat trick since joining the Leafs to help them secure a win over the Detroit Red Wings. Additionally, four other Leafs skaters saw the back of the net in this high-scoring game.

For Detroit, Dylan Larkin netted two goals and one assist to post a three-point night.

Rickard Rakell opened scoring in this matchup 6:19 into the first period. His goal was assisted by Josh Manson and Sam Steel.

Just over a minute later, Tyler Ennis tied the game up 1-1. His goal was assisted by Lassi Thomson and Thomas Chabot.

No goals were scored in the second, but Troy Terry tallied the game-winner for the Ducks in the third. The sole assist on this goal was credited to Ryan Getzlaf.

For Anaheim, John Gibson posted a great individual performance in this matchup. He made 44 saves on 45 shots to earn a save percentage of .978.

For the Senators, Anton Forsberg allowed two goals on 20 shots and ended his night with a save percentage of .900 flat.

Gerry Mayhew got the Flyers on the board first with a goal scored 9:33 after puck drop. His goal was assisted by Rasmus Ristolainen and Morgan Frost.

9:24 into the second, Cam Atkinson increased the Flyers lead to 2-0. His goal was assisted by Claude Giroux.

15:15 into the second, Viktor Arvidsson got the Kings on the board. His goal was assisted by Sean Durzi and Phillip Danault.

Just over nine minutes into the third, Cam Atkinson scored his second goal of the night. This time his goal was short-handed.

Just 45 seconds after Atkinson’s goal, Viktor Arvidsson also got goal number two to bring the Kings within one. Arthur Kaliyev and Sean Durzi earned assists on the play.

Anze Kopitar tied the game up 3-3 with under a minute left in regulation. His goal was unassisted.

For the Flyers, Carter Hart found his way back into the win column by stopping 37 out of 40 shots.

Vladimir Tarasenko opened scoring just over six minutes into this game. His goal came on the power play and was assisted by Brayden Schenn and Justin Faulk.

14:23 into the first, Paul Stastny tied the game up 1-1 with an unassisted goal.

Just under eight minutes into the second, Kyle Connor gave Winnipeg the go-ahead goal. The sole assist on the score was credited to Pierre-Luc Dubois.

Under three minutes later, Nate Schmidt scored a power play goal to put the Jets up 3-1. His goal was assisted by Mark Scheifele and Kyle Connor.

At the end of the third, Paul Stastny notched goal number two of the night via an empty-netter. This goal was assisted by Neal Pionk.

For the Blues, Ville Husso had an abnormally rough showing. He allowed three goals on 23 shots and ended his night with a save percentage of .870.

Tomas Hertl opened scoring 6:10 into the first period. His goal was assisted by Rudolfs Balcers.

17:17 into the first, Jonathan Dahlen increased the Sharks lead to 2-0. His goal came on the power play and was assisted by Noah Gregor and Nick Bonino.

With under a minute left in the first, Gustav Forsling got the Panthers on the board. His goal was assisted by Sam Reinhart and Mason Marchment.

The sole goal of the second period belonged to Matt Nieto. Nick Bonino and Marc-Edouard Vlasic earned assists on the score.

Aleksander Barkov brought the Panthers within one 1:26 into the third. His goal was assisted by Jonathan Huberdeau and Carter Verhaeghe.

4:50 into the third, Jonathan Dahlen scored his second goal of the game. This goal once again came on the power play. Brent Burns and Nick Bonino earned assists on the play.

7:30 into the third, Mason Marchment notched a goal. Sam Reinhart earned the sole assist on this goal.

Jonathan Huberdeau tied the game up 4-4 9:38 into the third. His goal was assisted by Carter Verhaeghe and MacKenzie Weegar.

In overtime, Sam Bennett scored the game-winner. His goal was assisted by Jonathan Huberdeau and Gustav Forsling.

For San Jose, James Reimer allowed five goals on 50 shots and posted a save percentage of .900.

For the Panthers, Sergei Bobrovsky made 30 saves on 34 shots and ended his game with a save percentage of .882.

Both Leon Draisaitl and Zach Hyman had two-goal nights for the Oilers. The other goal scorers for Edmonton in this game were Derek Ryan, Evander Kane and Ryan Nugent-Hopkins.

For Montreal, Josh Anderson notched a goal at the start of the second. His goal was assisted by Ben Chiarot and Jake Evans.

Tyler Toffoli also found the back of the net. His goal came on the power play and was assisted by Mike Hoffman and Nick Suzuki.

In net for Edmonton, Stuart Skinner made 21 saves on 23 shots for a save percentage of .913.

On the Montreal end of the ice, Sam Montembeault allowed six goals on just 16 shots during two periods of play. Cayden Primeau entered the game in the third and made seven saves on eight shots in his 20 minutes of ice time.

In net for the Red Wings was Alex Nedeljkovic. He allowed five goals on 35 shots for a save percentage of .857.

Brett Howden opened scoring 5:25 into the first. The sole assist on Howden’s goal was credited to William Carrier.

William Carrier then got a goal of his own in the second. This time Brett Howden tallied the sole assist.

13:12 into the third, Ross Colton scored to put Tampa on the board. His goal was assist day Corey Perry and Pat Maroon.

Corey Perry tied the game up 2-2 17:12 into the third. His goal was unassisted and would force this game to go to additional minutes. Tampa Bay would not be able to complete the comeback, as they fell in shootout.

For the Lightning, Andrei Vasilevskiy allowed two goals on 27 shots to end his night with a save percentage of .926.

8:02 into the first, Jordan Martinook scored the first goal of the game. His goal was assisted by Seth Jarvis and Brady Skjei.

Just over four minutes later, Andrei Svechnikov put the Hurricanes up 2-0. Ian Cole earned the sole assist on this score.

Jesper Boqvist scored his first goal of the year to get New Jersey on the board towards the end of the first. His goal was assisted by Jimmy Vesey and Janne Kuokkanen. This would be the last score in this matchup.

For Carolina, Antti Raanta barely missed out on a shutout and made 24 saves on 25 shots.

Kyle Okposo scored a power play goal 7:02 into the first to open scoring. His goal was assisted by Jacob Bryson and Cody Eakin.

Peyton Krebs increased the Buffalo lead to 2-0 15:07 into the first. His goal was assisted by Casey Mittelstadt and Alex Tuch.

In the second, Alex Tuch notched a goal of his own. Peyton Krebs and Tage Thompson were credited with assists on the play.

In the third, Shayne Gostisbehere scored the lone Coyotes goal. His goal came on the power play and was assisted by Clayton Keller and Phil Kessel.

For the Sabres, Craig Anderson allowed just one goal on 28 shots to post a save percentage of .964. He had a perfect game at even-strength.

For Arizona, Karel Vejmelka allowed three goals on 35 shots and ended his night with a save percentage of .914.

This was an incredibly low-scoring matchup that saw no goals in all 60 minutes of regulation. Thus, this was a matchup for the goalies.

Thatcher Demko arguably had the better game out of the two netminders. He faced 32 shots and allowed just the OT-winner to sneak past him. He ended his game with a save percentage of .969.

For Calgary, Jacob Markstrom earned himself his second shutout in his last three appearances. However, he only faced 15 shots on net the entire night.

The only goal that was scored came courtesy of Johnny Gaudreau 29 seconds into overtime. Elias Lindholm earned the only assist on the play.