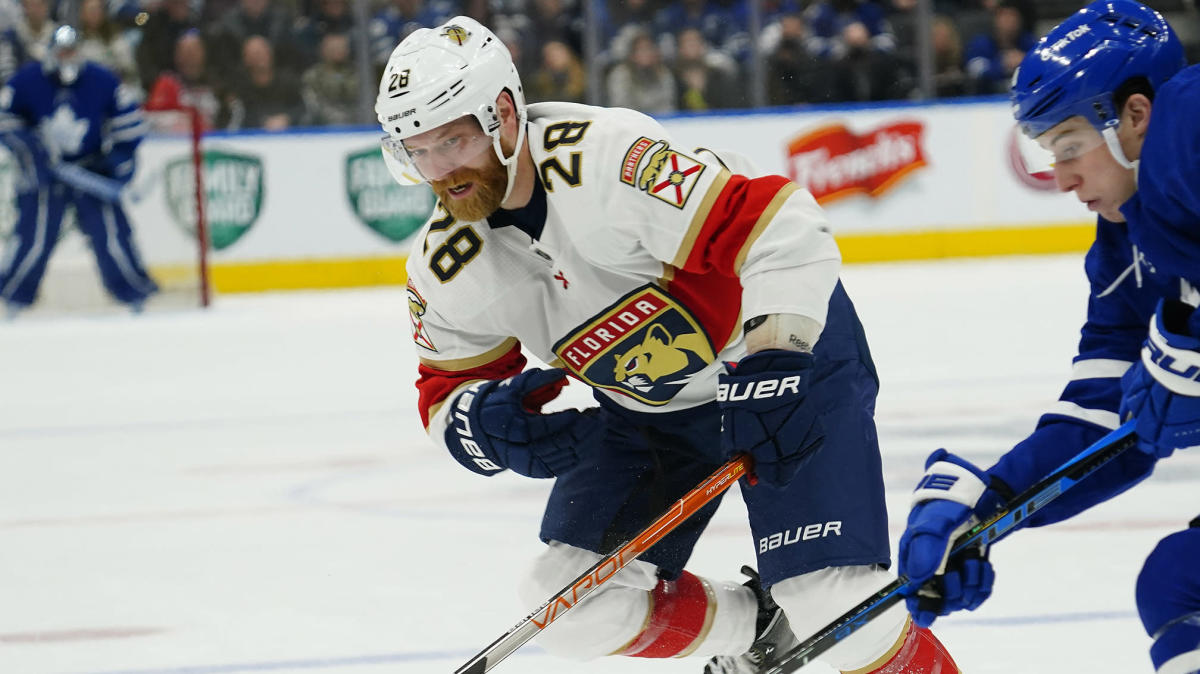 1 – Claude Giroux – F – Florida Panthers:
The Panthers are all-in this season. They went out and acquired Giroux, Ben Chiarot and Robert Hagg before the deadline, which means they’re hoping to go on a long playoff run. Giroux isn’t as productive as he once was, but he can still make an impact.

2 – Hampus Lindholm – D – Boston Bruins:
The Bruins needed an upgrade on defense, and they found one in Lindholm. They like him so much that they gave him a long-term extension right after the trade. He’ll be able to eat a significant amount of minutes on the back end.

3 – Marc-Andre Fleury – G – Minnesota Wild:
Fleury is on the move again. The veteran will play for his third team in just a few months, but the Wild are hoping that he could lead them to another championship. The duo of Fleury and Cam Talbot is intriguing to say the least.

5 – Brandon Hagel – F – Tampa Bay Lightning:
The fact that the Bolts gave up multiple first-round picks for Hagel raised some eyebrows, but he’s productive and inexpensive.

6 – Mark Giordano – D – Toronto Maple Leafs:
We know the Leafs can score, but can they defend well enough to win a Stanley Cup? Time will tell. They had a clear need on D and Giordano certainly addresses that.

7 – Artturi Lehkonen – F – Colorado Avalanche:
The Avalanche also got Josh Manson from the Ducks before the deadline. Lehkonen isn’t the flashiest guy out there, but he works hard, moves well and is a capable two-way player.

8 – Max Domi – F – Carolina Hurricanes:
Domi provides Carolina with another scoring option, and he also played with an edge. He’s just a few years removed from a 72-point season in Montreal.

9 – Andrew Copp – F – New York Rangers:
The Rangers made multiple moves on deadline day, and they should all help in different ways. Copp has been producing at a 0.6 points-per-game pace this season, which means he could hit the 40-point mark for the first time in his NHL career.

10 – Marcus Johansson – F- Washington Capitals:
This is Johansson’s second stint in Washington, so he’ll know what to expect. He should be able to give them quality minutes as a middle-six forward, who can chip in offensively.

11 – Nick Leddy – D – St. Louis Blues:
Leddy was playing well over 20 minutes per game with the Red Wings, and he managed to collect 16 points in 55 games with them. He gives the Blues another puck-moving depth defender.

12 – Brett Kulak – D – Edmonton Oilers:
Kulak is an underrated, puck-moving defender, who can skate and jump up into the play. He doesn’t put up big offensive numbers, but you’ll notice him for the right reasons often enough.

13 – Travis Dermott – D – Vancouver Canucks:
The Canucks shipped Hamonic to Ottawa for a draft pick and then landed Dermott from Toronto for a pick. That’s some nice business by GM Jim Rutherford. Vancouver upgraded on defense.

14 – Owen Tippett – F – Philadelphia Flyers:
The Flyers got tippet as part of the Giroux trade with Florida. The former 10th overall pick hasn’t developed as quickly as many people expected but he’s still very young. The 23-year-old should get more of an opportunity on a mediocre Flyers team.

15 – Calle Jarnkrok – F – Calgary Flames:
The Flames made their big splash a few weeks ago when they landed Tyler Toffoli from Montreal, but this was a nice depth acquisition. Jarnkrok might flirt with 20 goals in 2021-22.

16 – Victor Rask – F – Seattle Kraken:
The Kraken have made a few trades during their brief history, but they rarely land players. The 29-year-old had fallen out of favor in Minnesota, but he might be able to resurrect his career in Seattle.

17 – Oskar Sundqvist – F – Detroit Red Wings:
Sundqvist is a nice depth pick up for a young Red Wings team. He registered a goal and an assist during his Wings debut against the Flyers on Tuesday night.

18 – Justin Barron – D – Montreal Canadiens:
The former first-round came over from Colorado in the Lehkonen trade. The youngster had a hard time cracking the Avs deep blue line, but he’ll get a great opportunity to showcase his talents with the rebuilding Canadiens.

19 – Kaapo Kahkonen – G – San Jose Sharks:
Kahkonen had a decent rookie year with the Wild last year, but Minnesota is ready to make a long playoff run now, so they preferred Fleury to a youngster. He should get a real opportunity to play in San Jose.

20 – Vladislav Namestnikov – F – Dallas Stars:
Namestnikov won’t garner many headlines, but he’s a capable secondary scorer that could chip in some offense during Dallas’ chase for a playoff spot.

21 – Jack McBain – F – Arizona Coyotes:
The Yotes made some minor transactions leading up to the deadline, but this is one that could pay off in a big way. The 22-year-old will get an opportunity to play in an environment that has minimal pressure.

22 – Zach Sanford – F – Winnipeg Jets:
Sanford didn’t cost the Jets much, as he was acquired from the Senators for a fifth-rounder. The six-foot-four, 205-pound forward gives Winnipeg a little more depth on the wings. He could be useful if they find a way to sneak into the playoffs.

23 – Zach Aston-Reese – F – Anaheim Ducks:
Anaheim nearly acquired Evgenii Dadonov from Vegas but that fell apart. So, they got Aston-Reese and Dominik Simon from Pittsburgh in a trade involving Rickard Rakell. Aston-Reese is nothing more than a depth forward at this stage of his career.

24 – Travis Hamonic – D – Ottawa Senators:
This was kind of a strange move for the Sens to make, as they gave up a third-round pick to add the veteran. It’ll be interesting to see why they were so enamored with Hamonic.

25 – Troy Stecher – D – Los Angeles Kings:
Giving Detroit a seventh-round pick for a veteran like Stecher is a nice move for a Kings team that has improved this season. The 27-year-old can play third-pairing minutes if necessary and not look out of place.

26 – Jeremy Lauzon – D – Nashville Predators:
The Preds got Lauzon from the expansion Kraken for a second-round pick in 2022. That seems like a steep price to pay for a depth defender.

27 – Taylor Raddysh – F – Chicago Blackhawks:
Raddysh was one of the many pieces the Blackhawks were able to land from Tampa Bay for Hagel. The former second-rounder will get to see a lot more ice time in Chicago than he did in Tampa.

28 – Andrew Hammond – G – New Jersey Devils:
The Devils made one minor move, as they shipped Nate Schnarr to Montreal for Hammond. The veteran netminder will serve as organizational depth for the second half of the season.

29 – Aiden Hreschuk – D – Columbus Blue Jackets:
The Jackets made just one deal around deadline time, as they shipped Domi to Carolina as part of a three-way deal. Hreschuk, 19, is playing his first season at Boston College. He was Carolina’s third-round selection in 2021.

30 – Buffalo Sabres – Sixth-round draft pick:
The Sabres didn’t make much noise on the trade front, as they acquired a sixth-round pick from Florida for Robert Hagg. The rebuild continues.

31 – New York Islanders- NA:
The Islanders didn’t make a move in the days leading up to the trade deadline.

32 – Vegas Golden Knights – NA:
The Golden Knights thought that they were allowed to ship Evgenii Dadonov to the Anaheim Ducks, but they weren’t aware of the no-trade clause in his contract. In the end, the Russian forward is staying put.

Royals phenom Bobby Witt Jr.'s 2022 goals: Start season in the majors – and get his own sunflower seed flavor