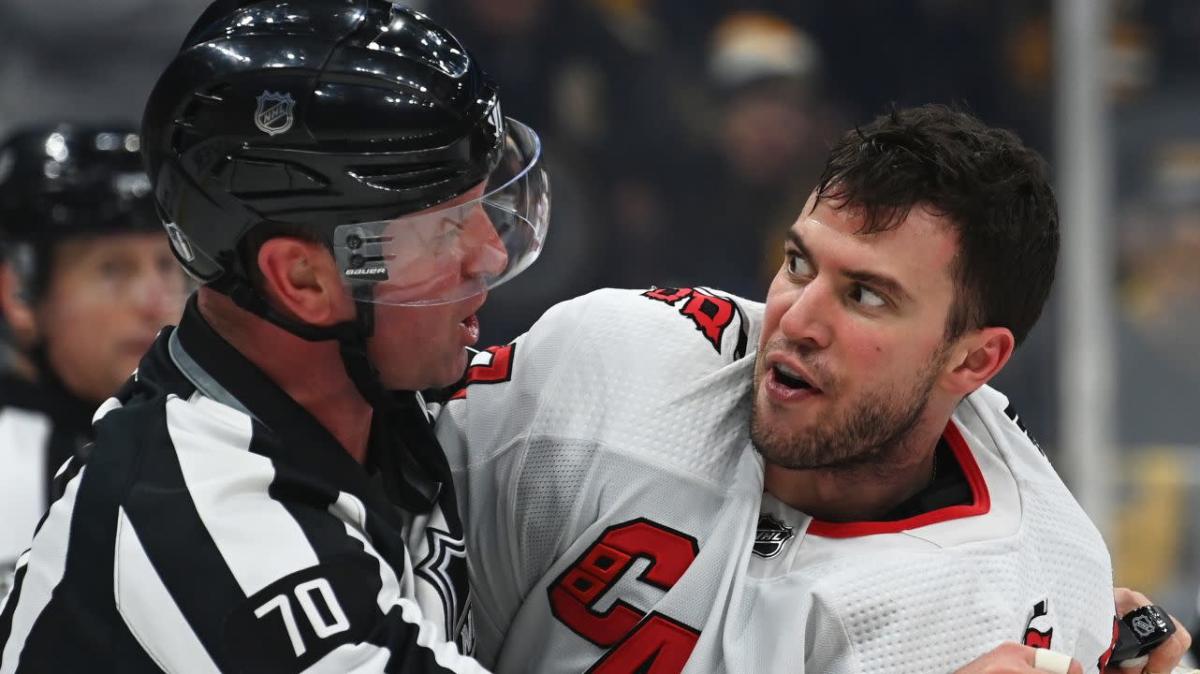 DeAngelo vs. Marchand will be must-watch from here on out originally appeared on NBC Sports Boston

BOSTON — Hurricanes defenseman Tony DeAngelo lost his composure in Game 4 and it hurt his team’s ability to prevent the Bruins from tying their first-round playoff series at two wins apiece.

DeAngelo became enemy No. 1 at TD Garden on Sunday afternoon. By the third period, he was being booed every time he touched the puck.

Bruins forward Brad Marchand was chirping at DeAngelo all game, most notably at the end of the first period when both players exchanged plenty of trash talk. It appeared as if Marchand was bringing up DeAngelo’s past issues and the ‘Canes defenseman responded by mocking the veteran right winger’s nose.

Marchand was asked after his team’s 5-2 victory what he said to DeAngelo. He didn’t make much of it.

“It wasn’t much of an exchange,” Marchand said. “I didn’t even know he was around. Kind of came out of nowhere. There wasn’t really much of one. Just saying hi. How’s your Mother’s Day?”

DeAngelo’s frustration reached an even higher level at the end of the third period when Marchand scored an empty-net goal. The Hurricanes defenseman threw his stick at Marchand and was lucky to escape a penalty.

DeAngelo also had an altercation with Bruins forward Curtis Lazar in the third period where the 26-year-old defenseman took a cross-checking penalty. It was a stupid penalty for DeAngelo to take with his team trailing by two goals. Lazar had thrown a couple big hits on DeAngelo earlier in the game.

DeAngelo’s nightmare game highlighted an overall lack of discipline from the Hurricanes on Sunday.

They committed eight penalties and put the Bruins on nine power plays — two of which Boston scored on. If the Hurricanes don’t regain their composure and stay out of the penalty box, they’ll have a tough time winning two of the next three games.