FORT WORTH, Texas — Tyler Reddick won a week later than he really wanted to in the playoffs, but he’ll accept another trophy for his case after capturing the NASCAR Cup Series race Sunday at Texas Motor Speedway.

Other drivers weren’t so accepting of their days, as tire issues plagued several, with three driver crashing because of blown tires while leading the race.

And then there was the driver vs. driver beef that NASCAR said could still result in penalties after race officials missed what happened on the track until it was too late to react.

While Reddick was the winner, no driver earned an automatic bid to the next round of the postseason. Joey Logano finished second and is the points leader with two races left before the championship-eligible playoff field gets cut from 12 to eight.

The NASCAR playoffs are designed for chaos, and after a chaotic day, Reddick celebrated.

“This was a crazy day,” said Reddick, who had issues on pit road as well as one point where door foam got stuck in his wheel. “It would take about an hour to go through all the things that went wrong. … It was like one of those days where you’re just waiting for the final blow to take you out.

“We had so many things happen to us. We won. I don’t know how to explain it.” 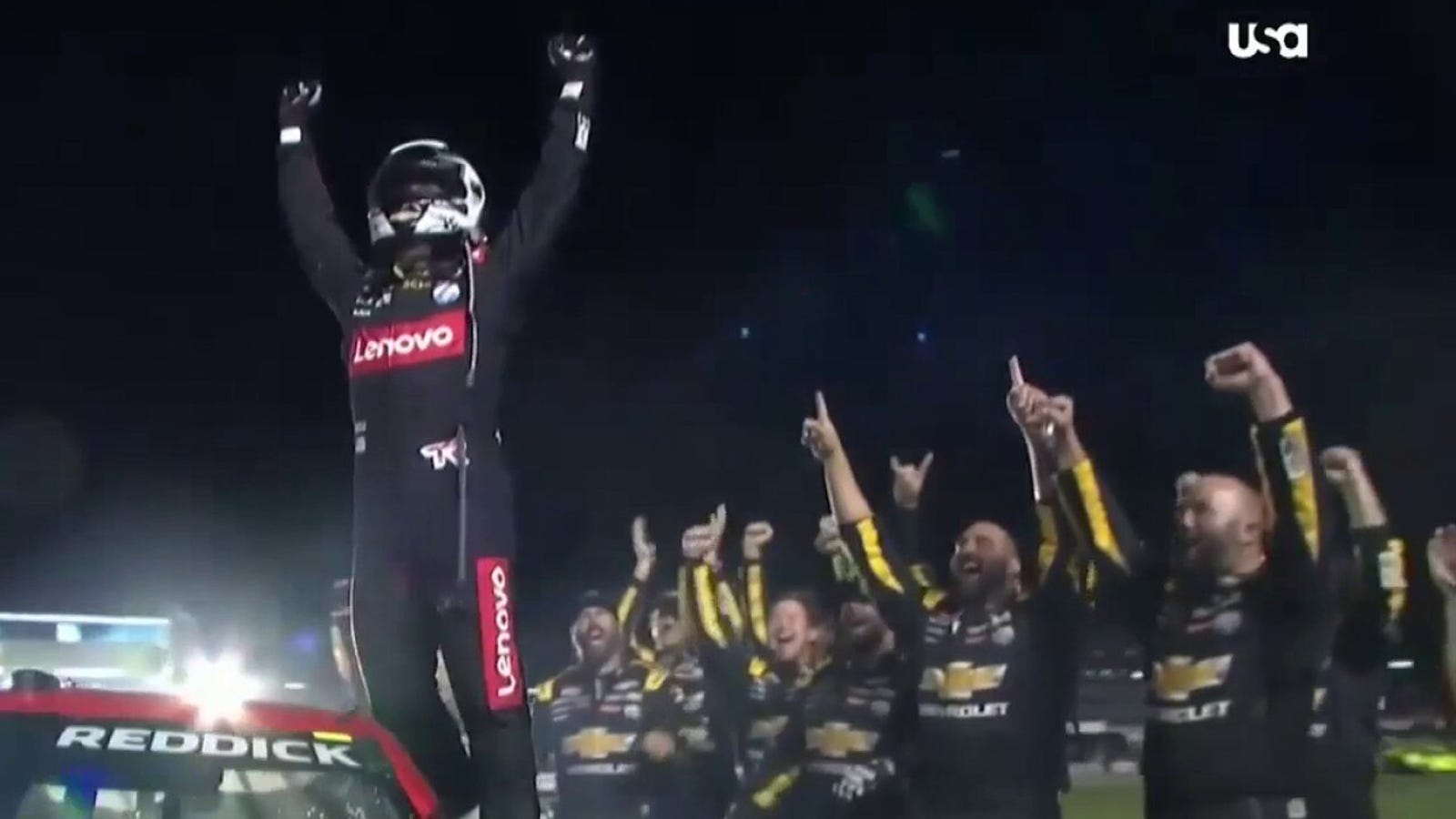 Tyler Reddick captures his third win of the season in wild Round of 12 opening playoff race at Texas Motor Speedway.

Here are three takeaways from a wild day and night at Texas:

William Byron, upset with Denny Hamlin over what he said was running him into the wall, spun Hamlin under caution after Martin Truex Jr. crashed.

Byron indicated afterward that he didn’t mean to spin Hamlin.

“I was just trying to give him a light tap there,” Byron said. “Nothing malicious. You see it all the time. … I was pretty frustrated with getting run into the wall off of [Turn] 2. It ultimately killed our car.”

Hamlin was irate, as he went from second to about 16th because of the spin and didn’t see Byron penalized.

“I got a lot tight but made sure I checked up [off the throttle] before I got into him,” Hamlin said. “We didn’t make contact. We both lost momentum. The caution came out, and then I got wrecked.

“I take my 10th-place finish and shake my head. It really took us out of contention to win.”

But hold on. NASCAR still might penalize Byron. NASCAR Senior Vice President of Competition Scott Miller said the sanctioning body didn’t see it initially but could issue a points penalty or other penalties (such as a fine) for Byron’s actions this week.

“When we were in the tower, we were paying more attention to the actual cause of the caution up there in dispatching our equipment,” Miller said. “The William Byron-Denny Hamlin thing we had no eyes on.

“We saw Denny go through the grass, and by the time we got to a replay that showed the incident well enough to do anything to it, we’d gone back to green. I’m not sure that issue is completely resolved as of yet.”

Teams know the loads they are putting on tires at tracks such as Texas can be punishing, and those who didn’t have tire issues said they were conservative with the tire pressures.

But obviously Goodyear and NASCAR will talk with teams to see if they can fix the problems.

Elliott wasn’t quick to blame Goodyear, as it has had to manufacture new tires for NASCAR’s Next Gen car, and NASCAR made several alterations during the development that impacted loads.

“Goodyear always takes the black eye, but they’re put in a really tough position by NASCAR to build a tire that can survive these types of racetracks with this car,” Elliott said. “I wouldn’t blame Goodyear.”

Bell had two tires fail, dropping him into a playoff hole out of which he will have to rally in the next two races at Talladega and the Charlotte road course.

“To have two right rears go in the first half of the race is very strange,” he said. “It’s a very disappointing day.”

Reddick was eliminated from championship contention by two points in the race a week ago at Bristol, so the win Sunday, while a positive, left Reddick with a bit of a what-could-have-been feeling after his third victory of the season.

If Reddick were still in the playoffs, he would be advancing to the “Round of 8,” NASCAR’s semifinal round.

“This will make that pain of not making it through a little bit easier,” Reddick said. “Even though it would have locked us into the Round of 8. We’re winning races. That’s what we’ll keep trying to do.”