Two races into the 2022 NASCAR Cup Series playoffs, only one driver knows that he will race in the second round.

NASCAR will cut its championship-eligible field from 16 to 12 following the first-round finale Saturday at Bristol Motor Speedway. The four winless drivers with the fewest points in the three-race round will be eliminated from championship contention.

With non-playoff drivers winning at Darlington (Erik Jones) and Kansas (Bubba Wallace), no driver has earned an automatic bid to the second round. Christopher Bell has advanced on points because he is at least 56 points ahead of six other drivers and, therefore, can’t fall below 11th, even if there is a new winner.

As for the rest of the field? There are no guarantees.

Certainly, some should worry more than others. Several could clinch during the race Saturday, as NASCAR awards points to the top 10 on a 10-to-1 scale after each of the first two stages.

Here’s a breakdown of where drivers stand and their chances to advance. (A caveat: The history at Bristol should be taken with some skepticism, considering that this is the first race with the Next Gen car on the concrete half-mile.)

SHOULD BE GOOD: These drivers have enough of a cushion that even if they have a really bad day Saturday, their chances of falling out of the top 12 are slim.

William Byron (+48 on 13th, +46 on 12th): Byron can clinch with eight points; that’s a 29th-place finish if he doesn’t earn any stage points. The Hendrick Motorsports driver isn’t great at Bristol but has one short-track win this year at Martinsville. He has failed to finish at Bristol only once in seven starts. His fans can start looking forward to the next round.

Denny Hamlin (+47 on 13th, +45 on 12th): Hamlin can also clinch with eight points; even though he is one point behind Byron, they have the same clinching scenario because Hamlin automatically wins all tiebreakers. Hamlin won a short-track race at Richmond earlier this year, and the Joe Gibbs Racing driver has finished in the top 10 in nearly half of his 31 Bristol starts. His quest for that elusive first Cup title will continue after Bristol.

Bubba Wallace holds off Denny Hamlin to win at Kansas

Bubba Wallace played playoff spoiler Sunday, as he held off Denny Hamlin to win at Kansas.

Joey Logano (+40 on 13th, +38 on 12th): Logano can clinch with 16 points — a 21st-place finish if he doesn’t earn any stage points. He has two career Bristol wins and 10 top-10s in 25 starts. The Penske driver is typically solid on short tracks and was second at Martinsville this year. He is still Penske’s best shot at winning a title, unless Ryan Blaney can find victory lane.

Ryan Blaney (+36 on 13th, +34 on 12th): Blaney can clinch with 20 points — a 17th-place finish if he doesn’t earn any stage points. He hasn’t finished worse than 10th in the three short-track races this year and has a respectable record at Bristol. Breathe easy, Blaney fans.

JUST DON’T WRECK OR FALL OUT: These drivers should be good. As long as they finish the race, they will advance.

Alex Bowman (+30 on 13th, +28 on 12th): Bowman can clinch with 26 points — an 11th-place finish if he doesn’t earn any stage points. Bowman was so quiet this summer that it’s a little surprising to see him in this position. Then again, he has advanced out of the first round of the playoffs each of the past four years, so why should this be any different? Bristol isn’t a great track for the Hendrick driver, but he doesn’t need to be great; he just needs to be good, which he certainly can be.

Chase Elliott (+28 on 13th, +26 on 12th): Elliott can clinch with 28 points — a ninth-place finish if he doesn’t earn any stage points. Who can forget the drama between Elliott and Kevin Harvick at the Bristol race a year ago? The Hendrick driver has two top-10s in three short-track races so far this year. The 2020 Cup champion, who has five top-10s in 11 career Bristol starts, should advance — but he also shouldn’t have wrecked on his own at Darlington.

Kyle Larson (+27 on 13th, +25 on 12th): Larson can clinch with 29 points — an eighth-place finish if he doesn’t earn any stage points. He has eight top-10 finishes at Bristol in 13 career starts. Like Elliott, the defending Cup champion should advance as long as he has no major blunders.

Ross Chastain (+26 on 13th, +24 on 12th): Chastain can clinch with 30 points — a seventh-place finish if he doesn’t earn any stage points. Some might worry about his average finish of 26.8 at Bristol, but the Trackhouse driver has had enough speed at the short track this year to be OK.

TIME TO BE NERVOUS: These drivers will need great races to advance. They also will need to earn stage points if other drivers don’t have trouble.

Daniel Suarez (+6 on 13th, +4 on 12th): Suarez would clinch with 50 points; he’d have to earn at least 15 stage points to get to 50 without winning. That seems unlikely, considering the Trackhouse driver’s mediocre finishes on short tracks this year. He has never finished in the top-5 in nine career Cup starts at Bristol; he’ll need to run his best Bristol race ever to advance.

Tyler Reddick (+2 on 13th): Reddick would clinch with 54 points; he’d need to earn 19 stage points (a first and a second in the stages) to get to 54 without winning. Reddick has one top-5 in three career starts at Bristol. He was good on the dirt there in the spring, and he would have won if he hadn’t been wrecked by Chase Briscoe on the final lap. Still, the Richard Childress Racing cars have struggled on short tracks. But Reddick is a fighter. If his car is any good, he’ll advance.

Kevin Harvick and Tyler Reddick talk about their chances to advance 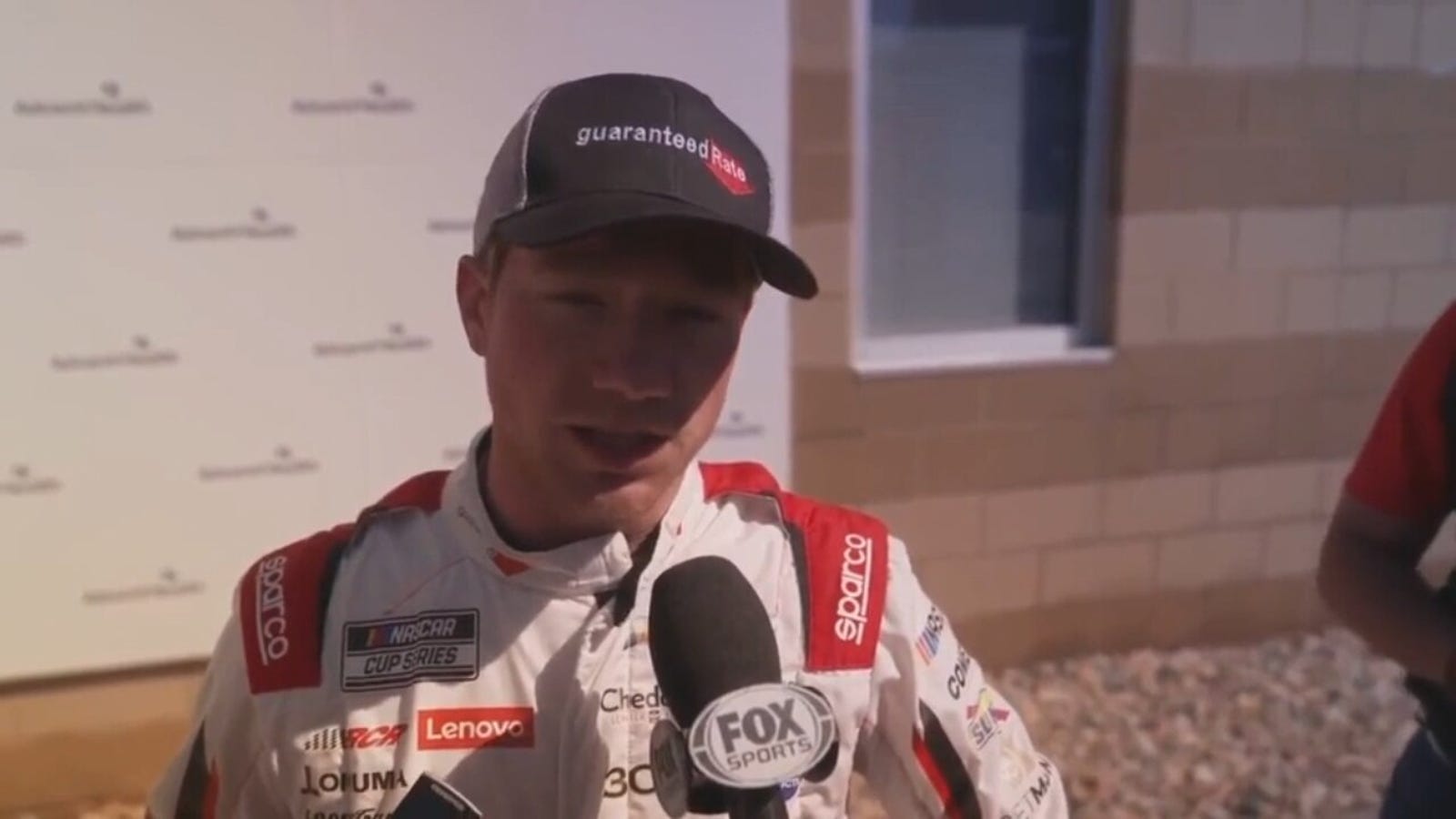 Kevin Harvick and Tyler Reddick talk about their days ending early at Kansas and where they stand as far as their chances to advance in the NASCAR playoffs.

Austin Cindric (+2 on 13th): Cindric would clinch with 54 points; the Penske driver would need 19 stage points (a first and a second in the stages) to get to 54 without winning. Cindric hasn’t had a top-10 on a short track this year. His highlight could be his Daytona 500 victory and clinching the Rookie of the Year award.

Kyle Busch (-2 on 12th): Busch would clinch with 55 points — if he sweeps both stages and finishes at least second. He has eight career Cup wins at Bristol and 19 top-10s in 32 starts. Maybe having his 2023 plans out in the open and everyone knowing he’s leaving Joe Gibbs Racing will eliminate some angst and create some good luck. Then again, will he need it? Busch was top-10 in all three short-track races so far this year.

Austin Dillon (-3 on 12th): Dillon would clinch with 55 points — if he sweeps both stages and finishes at least second. Considering that he has just one top-5 and three top-10s in 15 career Bristol starts, that could be a tough ask. Then again, he was third at Martinsville this year, and the grandson of Richard Childress showed at Daytona that he can surprise some people.

Kyle Busch talks about his spin Sunday at Kansas and his outlook on trying to advance at Bristol from a couple of points below the playoff cutoff.

NEED TO WIN: These two drivers are so low in points and have to leapfrog so many others that winning is pretty much their only way to advance.

Chase Briscoe (-9 on 12th): Briscoe can clinch only with a win or help. He was 13th in his only Bristol start as a rookie last year. The Stewart-Haas Racing driver was ninth at Martinsville earlier this year, but ninth likely won’t be enough Saturday.

Kevin Harvick (-35 on 12th): Harvick can clinch only with a win or help. He has three career victories at Bristol, and when asked to assess his chances to win and get in, he quipped: “Better than most.” Nicknamed “The Closer,” the 2014 Cup champion is a fierce competitor and can’t be counted out. The SHR veteran was fast at Richmond this year, with a second-place finish and a victory.

Adam Wainwright and Yadier Molina's historic partnership, and the 17 other catchers

Montrezl Harrell chooses to wear No. 5 for Sixers after signing

Zane Smith will get opportunities after NASCAR Truck Series championship