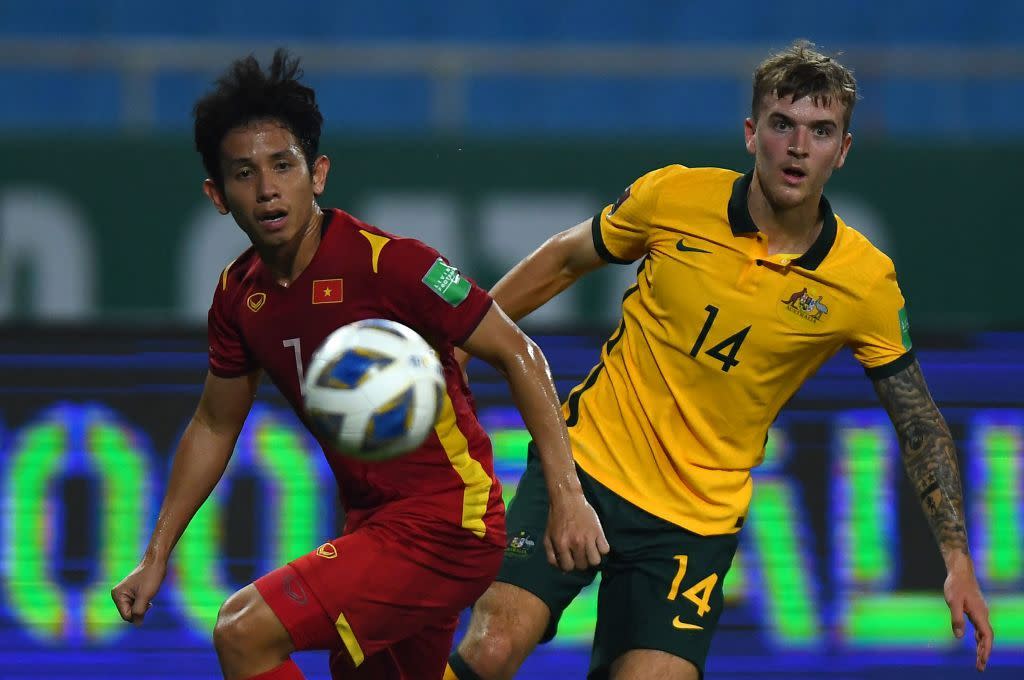 SEOUL, South Korea (AP) Australia edged Vietnam 1-0 in Hanoi on Tuesday to make it two wins out of two in Group B of Asia World Cup qualifying, but China’s campaign was teetering after a second consecutive defeat.

In Group A, South Korea defeated Lebanon 1-0 at Suwon World Cup Stadium to pick up its first win of the stage, after 0-0 against Iraq five days earlier.

Rhyan Grant ran to the far post to steer in a header after 43 minutes in an empty My Dinh Stadium. His first international goal kept the Socceroos on track for a fifth successive World Cup appearance.

Vietnam is making its first appearance at this stage of qualifying but had chances, including a VAR review for a possible penalty against Grant’s handball before the visitors took the lead.

In humid conditions and on a difficult playing surface, Vietnam pushed for a point but couldn’t find a way past Mat Ryan in the Australia goal. Mitchell Duke looked to have sealed the win with a low shot four minutes from the end but the goal was ruled offside.

It was Australia’s 10th win in a row and Football Australia said in a statement that the Socceroos became the first country in the Asian Football Confederation to achieve such a winning streak in one qualification campaign.

It said Australia had shared the mark of nine with Uzbekistan and South Korea, both countries while qualifying for the 2018 World Cup in Russia.

Also in Group B, Japan bounced back from a shock defeat at home to Oman with a comfortable 1-0 win over China, which failed to record a shot on target.

Yuya Osako shot home from close range just before halftime to send China to a second successive defeat, leaving its chances of reaching the World Cup for the second time in its history looking slim.

Saudi Arabia picked up a second win, defeating Oman 1-0 in Muscat to move level with Australia on six points. Saleh Al-Shehri settled the game three minutes before the break.

In Group A, South Korea recovered from the late withdrawal of Son Heung-min to defeat Lebanon 1-0. The Tottenham Hotspur star injured a calf in training on Monday and was deemed unfit to play.

Without Son, South Korea struggled against Lebanon goalkeeper Mostafa Matar. The deadlock was broken only on the hour, when Kwon Chang-hoon shot past Matar from close range to keep Korea on track for a 10th successive World Cup appearance.

Iran tops the group with six points after a 3-0 win over Iraq. Alireza Jahanbakhsh opened the scoring with a header in the second minute, FC Porto striker Mehdi Taremi added a second with 19 minutes remaining and Ali Gholizadeh sealed the victory in added time.

United Arab Emirates drew 1-1 with Syria with Ali Mabkhout scoring after 11 minutes. The striker’s 77th international goal moves him above Lionel Messi to become the second highest active goal scorer behind Cristiano Ronaldo. Mahmoud Al-Baher earned a first point for Syria with a goal just after the hour.

The top two from both six-team groups qualify automatically for the World Cup next year in Qatar. The third-place teams meet in a playoff and the winner faces an opponent from another confederation.