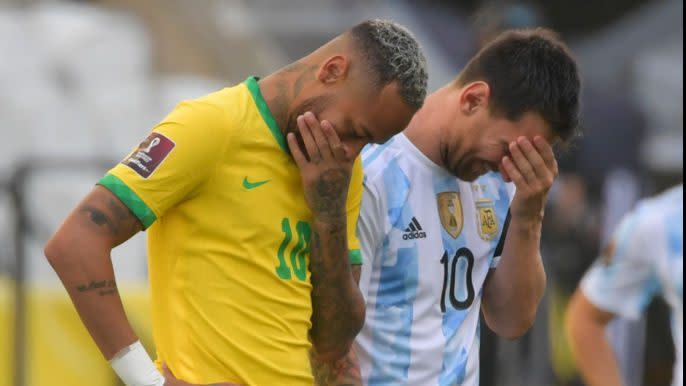 Brazil vs Argentina, the showpiece of this international break and perhaps all of World Cup qualifying until the playoffs, has been suspended in a shocking turn of affairs.

Brazil’s national team has been hampered by clubs not releasing their players for the international break, with Thiago Silva, Fabinho, Gabriel Jesus, Richarlison, Ederson, Allison Becker, Fred, and Raphinha all missing from action.

Iit’s difficult to read Anvisa’s move as anything other than cynical.

Yet reports are speculating that Lo Celso, Romero, Martinez, and Buendia may have been taken into isolation. Remember: both teams have played matches this international break.

From Paul Gilmour at Sky Sports:

“Brazil entry requirements state anyone who has been in the UK in last 14 days must quarantine.”

What makes the surprising break in the game downright stunning is that the match went 11 minutes. Argentina players walked off the field after officials approached the field after seven minutes.

The Brazil team has stayed on the pitch for nearly 30 minutes even as Lionel Messi returned from the Argentina dressing room in a bid to discuss affairs with Casemiro, Neymar, and officials.

An already congested World Cup qualifying schedule will be thrown into chaos here, as the two best teams in CONMEBOL qualifying so far could be a match behind the field or be playing on less rest for their third match of this break if the match picks up Sunday.

This, in the small picture, would be hugely beneficial to Brazil if it can reschedule this game when European clubs may be comfortable releasing their stars. Also, in all pictures, it’s embarrassing for CONMEBOL and FIFA (not to mention detrimental to those of us ready to make Brazil vs Argentina (and Neymar vs Messi) an incredible appetizer for USMNT vs Canada).

Lowry on why he chose the Heat: “For me, it’s only championships or bust”