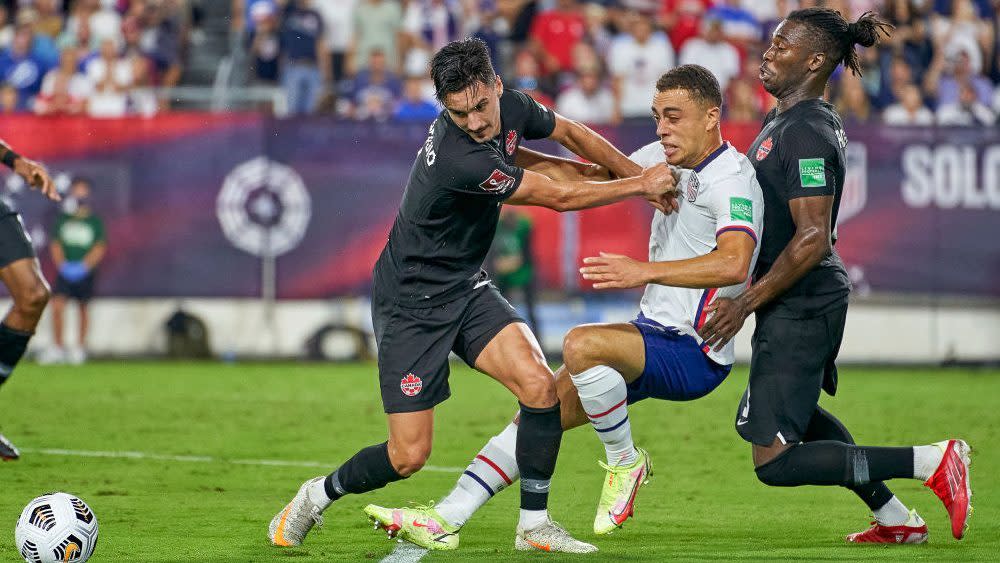 Crisis is too strong of a word, but welcome to the first dilemma of the United States men’s national team’s Gregg Berhalter era.

The USMNT’s first two World Cup qualifiers since its humiliating exit from 2018 qualifying — you might remember the loss to Trinidad and Tobago’s B-team in Couva — have ended in draws: a scoreless away match in El Salvador and a 1-1 split with Canada in Nashville.

Results from around CONCACAF have made the draws less damaging than they could’ve been, as only presumed qualifier Mexico (two wins) and 2018 participant Panama (one) have made their way into the win column, but what exactly are the worries and is the grass greener and safer than your typical CONCACAF away pitch?

Yes, er, most likely. Probably, even.

Here we’ll dig into the reasons behind the 0W-2D-0L start to “The Octagonal” and evaluate whether those factors could be long-term worries while also touching on some key quotes from Gregg Berhalter, Tyler Adams, and Christian Pulisic after the 1-1 draw with Canada.

Most simple rationale first: Absences hurt (and continue in Honduras)

USMNT supporters waking up Monday might’ve looked at their two points and grimaced a little before saying, “Yeah but we’re just over half-strength.”

They wouldn’t be wrong.

Berhalter was without Christian Pulisic, Timothy Weah, and Zack Steffen in El Salvador and opted to rest top defender John Brooks. Pulisic returned for Canada, but Weston McKennie was suspended for breaking a team rule and Giovanni Reyna was injured in San Salvador.

Those are players who are factors at Chelsea, Nice, Manchester City, Wolfsburg, Juventus, and Borussia Dortmund. There have been periods in USMNT history where there weren’t players in the pool on the books at top clubs in Europe, let alone five of them.

Also either injured or not called up? Yunus Musah, Gyasi Zardes, Matthew Hoppe, Jordan Morris, Daryl Dike, Chris Richards, and Aaron Long. And Bryan Reynolds. And Matt Miazga. And Reggie Cannon (who may be the biggest winner of this break so far with Sergino Dest and DeAndre Yedlin struggling at right back).

You get the idea. You could craft a lineup of absences that you’d expect to get a point or three in El Salvador.

Tyler Adams admitted disappointment in McKennie’s absence and his team’s performance, but bristled at the idea that the players’ improved club pedigree matters much (even if it does more than a little, a passed litmus test of the quality of talent developed and identified in the pool).

“It’s a team sport. Doesn’t matter where we come from. If we don’t go out there and do the things we’re good at, then we’re just a group of names on a piece of paper. Other teams maybe they don’t have the players that play for these big clubs, it doesn’t matter. No individual is going to qualify for a World Cup.

The talent above means that CONCACAF foes, more than ever, are going to choose physical and defensive options against the USA.

You may even see it from Tata Martino’s Mexico after the U.S. beat them twice this summer, especially with Mexico 2-0 and already in a position where it’s unlikely to be under the gun during qualifying.

So when Christian Pulisic said the following quote after the game, it’s a clarion call to the player pool and even his manager.

“We need new ideas at times. Today we didn’t test them enough, whether it was not being direct enough. I’m not too sure. We didn’t break them down. Obviously it wasn’t good enough.”

Josh Sargent struggled at center forward in El Salvador, while Jordan Pefok was merely “just fine.” An average Zardes would’ve been an upgrade over both in terms of those performances, while Matthew Hoppe, Daryl Dike, and Nicholas Gioachhini are among the names who could be answers as well (Teenager Ricardo Pepi was on the bench and is the name on everyone’s lips due to his 11 goals in MLS this season, but a softer entry point would be a preferred way to introduce him to the CONCACAF climate).

Playing Pulisic in his preferred position could also work, and service from a healthy Reyna would be nice, too.

What about those ideas? Berhalter’s on the hook for some of this, too. The Yanks were bad in tight spaces, especially anywhere near the top of the 18, and almost all of Sunday’s danger arrived from Pulisic being fouled or Antonee Robinson whipping in crosses or making surging runs into the Canadian third.

Weston McKennie looks like an unbridled force in a USMNT shirt, but he’s gotta be able to put on the shirt in order to be a factor.

McKennie was dropped from the team in Nashville for breaking a team rule, the 23-year-old issuing an apology on social media for the infraction just as he did when he hosted a team party at Juventus and was punished by the Serie A club.

It’s inexcusable to the extent that it remains stunning a day later than the Texan would risk breaking a rule during a pandemic after the nation underperformed in its first World Cup qualifier since bombing out of 2018 eligibility.

And if Berhalter wanted to be lenient — he doesn’t, and hasn’t committed to using McKennie in Honduras — he couldn’t because McKennie is such a huge part of this team’s guts.

While Berhalter tried to not to discuss McKennie’s infraction and Pulisic clearly measured his words in how he spoke about his friend, Tyler Adams was a bit more open about the issue.

“It’s not an ideal because he’s such an important character for this team, not just on the field but for what he does to bring us together,” Adams said. “It’s disappointing but it’s that next man up mentality. … To be fair it hurts us but I don’t think it affected the team too much.”

Maybe it did. Maybe it didn’t. But we’d expect to see McKennie in action Wednesday unless his offense was worse than has leaked in the press.

Will the USMNT qualify for the World Cup?

Most likely. CONCACAF qualifying is already extremely forgiving to the confederation’s powers and even moreso with 14 matches on this docket and seven of the 10 matches so far being draws.

Yes, they would’ve targeted six points from El Salvador and at least four from Canada — with a home win — but changes in absences and answers will deliver plenty of success.

This is a program who, prior to the last five days, had not lost to anyone besides Switzerland since October 2019 and only drew Wales.

To fall off the World Cup map, it would need a collapse bigger than anything Jurgen Klinsmann and Bruce Arena oversaw despite having the deepest pool in American history.