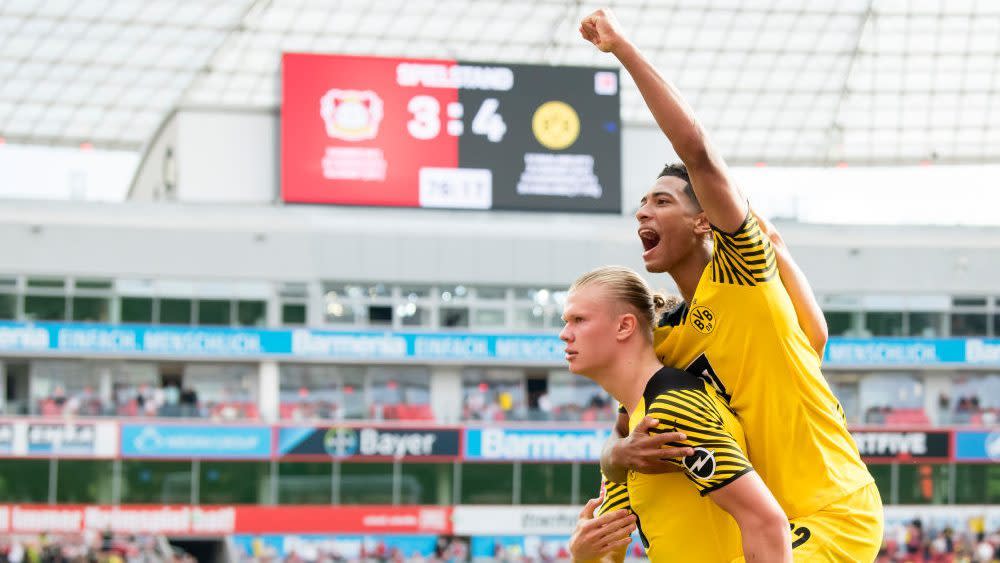 Borussia Dortmund came back to beat Bayer Leverkusen in a seven-goal thriller and Bayern Munich pasted RB Leipzig in pivotal returns to league action after the travel and travails of an international break.

Wolfsburg also won to stay atop the division by two points over Bayern while Mainz — yes, Mainz — is having a nice early season and sits fourth after multiple seasons of struggles.

Here’s what went down in Germany on Saturday.

Two of the Bundesliga’s brightest young stars dueled at Leverkusen, with Dortmund thrice answering goals from the hosts before VAR put Erling Haaland on the penalty spot for a late winner.

Florian Wirtz scored and had an assist as Leverkusen took a 2-1 lead, Haaland getting the first of his two goals in between.

Haaland then set up Julian Brandt after halftime for BVB’s second equalizer of the day before Moussa Diaby put the hosts back on top in the 55th.

Raphael Guerreiro tied it at 3 in the 71st minute, before Marco Reus won a penalty through video review that Haaland put home in the 77th.

Julian Nagelsmann had a triumphant return to Red Bull Arena, even if the score line didn’t indicate tense moments in the contest between Bayern Munich and his former team.

Now managed by American coach Jesse Marsch, Leipzig had most of the ball in a first-half that only saw a Robert Lewandowski penalty dot the score sheet.

Bayern manufactured the big chances of the game, and got a goal and an assist from Jamal Musiala with Leroy Sane and Eric Maxim Choupo-Moting also scoring goals.

Leipzig, whose goal came via Konrad Laimer, is still adapting to another summer of sales and a managerial change ahead of Wednesday’s Champions League start at in-form Man City.

Nagelsmann now has consecutive big-goal games under his belt after a slow start to life in Bavaria. He was pleased how his return to Leipzig played out on Saturday.

“I always felt good in this stadium, today wasn’t any different,” Nagelsmann said. “We weren’t that much better as the scoreboard is telling. It was a pretty wild game from both sides in the first half. We won 4-1 in the end, but we can play better than we did today.”

Leipzig did get a banger for its goal.

Blake Griffin reflects on his time with the Pistons and Clippers