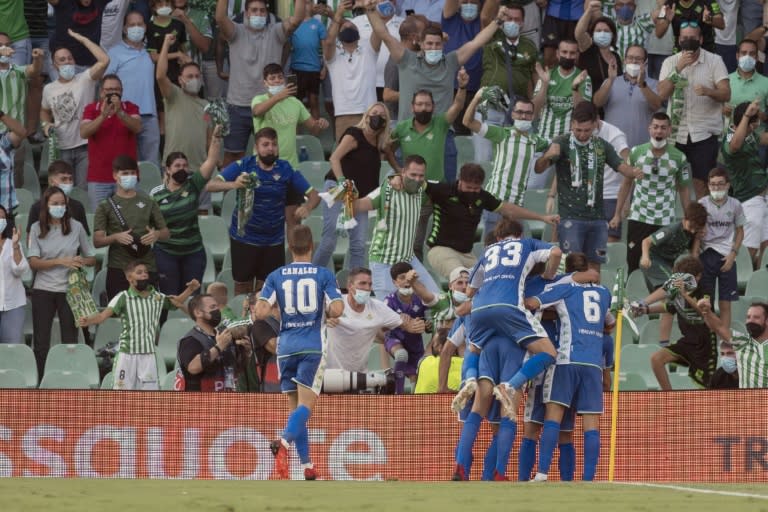 Celtic threw away a two-goal lead to lose 4-3 to Real Betis in a pulsating start to the Europa League group stages, while West Ham cruised to a 2-0 victory over Dinamo Zagreb.

Eighteen years on from reaching the UEFA Cup final in Seville, Celtic returned to Andalusia and got off to a dream start at the Benito Villamarin.

Albian Ajeti bundled home the opener thanks to a VAR review after the goal had initially been ruled out for handball.

The Swiss striker was then chopped down in the box by Claudio Bravo and Josip Juranovic buried his first Celtic goal from the penalty spot.

But the defensive frailties that have characterised Ange Postecoglou’s early days in charge of the Glasgow giants were exposed to cost the visitors a vital victory.

Iglesias completed the comeback with a near post flick early in the second-half before Juanmi’s shot flew in off the inside of the box.

Anthony Ralston pulled a goal back three minutes from time to give Celtic some hope, but Betis held on for all three points.

Bayer Leverkusen were also winners in Group G as the Germans came from behind to beat Ferencvaros 2-1 thanks to a second-half winner from 18-year-old star Florian Wirtz.

Michail Antonio pounced off a slack back pass to continue his early season scoring streak with his fifth goal in as many games.

Declan Rice then galloped from inside his own half before producing a powerful finish five minutes into the second-half.

Genk were 1-0 winners at Rapid Vienna in the other game in West Ham’s group.

Galatasaray edged a blockbuster clash with Lazio 1-0 thanks to Thomas Strakosha’s own goal.

In the same group, Marseille were held 1-1 by Lokomotiv Moscow as former Chelsea midfielder Tino Anjorin grabbed a late equaliser for the Russians.

Leicester host Napoli and Rangers take on Lyon in the pick of the 1900GMT kick-offs.