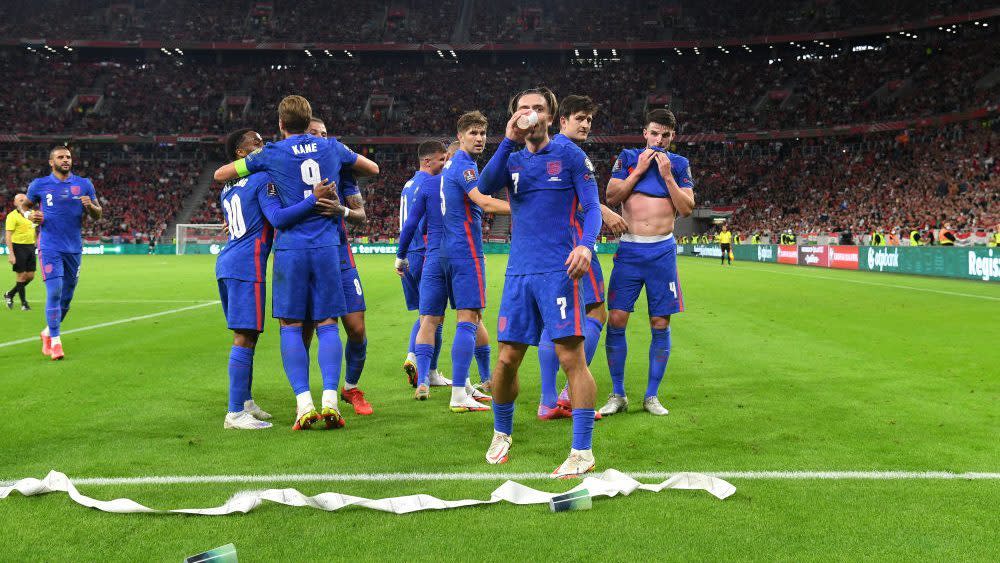 England’s players and its manager say they did not hear racist chanting in Thursday’s 4-0 away win over Hungary in World Cup qualifying, though they’re quite aware they were booed for taking the knee.

The Three Lions continue to take the knee before kickoff to protest against racial injustice, and a selection of Hungary’s fans let them know their feelings on the gesture.

A cup struck Raheem Sterling during a goal celebration. Jack Grealish drank out of a thrown cup. The boos were very loud on the broadcast.

It was ugly even apart from the booing of the anti-racism gesture and allegations of racist chanting.

“It was disappointing to hear the boos but it has happened in previous games,” said Harry Maguire. “We knew what to expect but I am happy all the boys stood by it.”

[ USMNT: How will USMNT line up without Pulisic? ]

Maguire, Harry Kane, John Stones, and boss Gareth Southgate all said that they had heard of monkey chants during the game but that they did not hear them during the win.

“I have heard reports of racism and we were not aware of that during the game,” Southgate said. “I am not sure we were particularly sensible celebrating right in front of their fans with the flare but the racism is the key part. We try to take a right stand, we knew taking the knee would get an adverse reaction and anything of that nature is unacceptable.”

Cups and flares were thrown at England after a goal celebration in one corner of the pitch, and reports of racism certainly stung the players.

Harry Kane said he hopes that if there were chants, that UEFA “come down strong” on Hungary. Stones was just upset that the gesture continues to be met with such venom.

“Personally I didn’t hear it, but was told about it after,” Stones said. “It’s so sad to think about that this happens at our games. I hope UEFA or whoever needs to take care of it does. We stand together as a team and did do before the game and we will continue fighting for what we believe in as a team and what we think is right.”

Sterling was joined on the scoresheet by Kane, Maguire, and Declan Rice, with Mason Mount, Luke Shaw, and Jack Grealish collecting assists in the 4-0 win.