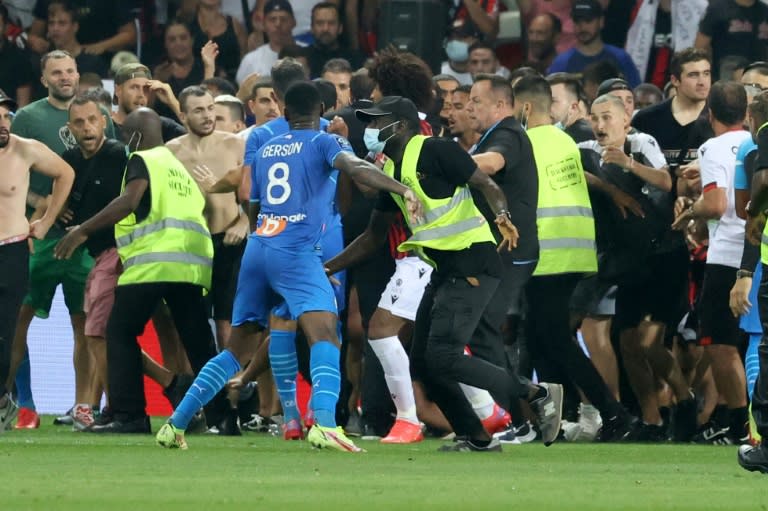 The French league (LFP) called for “collective action” after ugly scenes caused the abandonment of Marseille’s game at Nice, in a letter to the country’s government and seen by AFP on Tuesday.

On Sunday evening, home supporters invaded the pitch and confronted the visitors’ Dimitri Payet, who had thrown back a bottle lobbed at him by the crowd.

A brawl then broke out involving players and spectators.

“The very regrettable violent scenes… remind us that safety at football matches and the control of some supporters are particularly complex,” the LFP’s president Vincent Labrune wrote to France’s ministers of the interior, law and education as well as its delegate in charge of sport.

“The LFP is quite limited in its ability to control the problems of violence and public order.

“It is, in fact, essential that the troublemakers are significantly sanctioned and that necessitates collective action from the clubs, authorities, local and national government and also, especially the law,” it added.

The LFP also mentioned objects thrown onto the field during Marseille’s game at Montpellier on August 8 and at Rennes’ home match with Nantes on Sunday as well as crowd trouble in three other top-flight fixtures this season.

Earlier on Tuesday, Marseille’s US owner Franck McCourt said he supported his team’s decision to leave the field at the Allianz Riviera stadium at the weekend.

After the incidents on the south coast, local authorities in Nice opened investigations and police arrested one man.

On Wednesday, Marseille and Nice will appear in front of a LFP disciplinary committee with the behaviour of their players, coaching staff and directors being discussed.