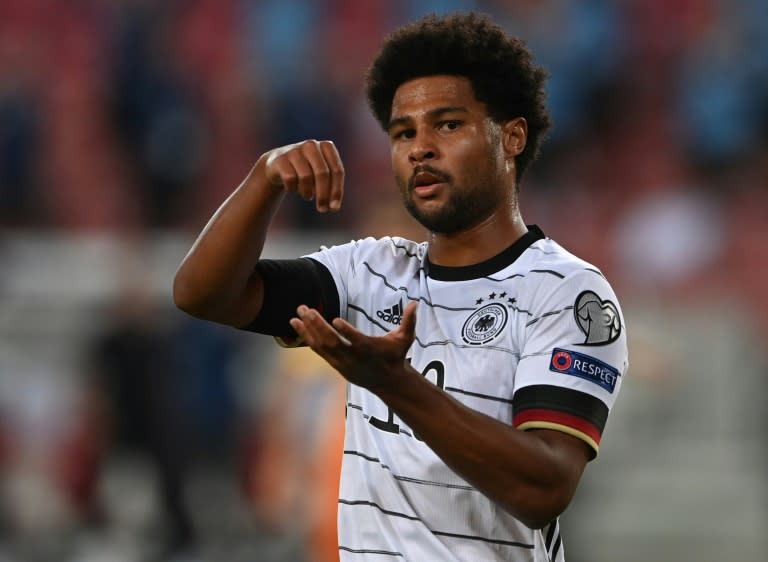 Serge Gnabry netted twice as Germany thrashed Armenia 6-0 on Sunday in Stuttgart to replace the visitors at the top spot of their World Cup qualifying group.

Gnabry showed off his stirring-gesture celebration with early goals before Marco Reus and Timo Werner also netted in the first-half as Germany raced into a 4-0 half-time lead.

Jonas Hofmann netted the fifth, then helped set up 19-year-old Karim Adeyemi to score on his debut as the Germans usurped the shell-shocked Armenians, who last lost a competitive game more than a year ago, to go two points clear at the top of Group J.

“We took the lead early on, which played into our hands,” Gnabry told RTL.

“We were good in front of goal, we could have scored even more.

“We’ll take the euphoria with us to Iceland to try to take points there,” he added with one eye on Wednesday’s next qualifier in Reykjavik.

The Germans made amends for their shock home defeat by North Macedonia last March to climb the table.

In only his second game in charge, Germany head coach Hansi Flick made six changes from the starting side which laboured past minnows Liechtenstein 2-0 last Thursday and this was a completely different level of performance.

The Germans took nearly every clear chance they created and pressed the visitors mercilessly.

“This is actually how we had imagined the start under Hansi would be,” said Germany midfielder Leon Goretzka.

After just six minutes, Goretzka lifted his pass over the defence for his Bayern Munich teammate Gnabry to fire his shot over stranded Armenian goalkeeper David Yurchenko.

Gnabry had another chance to use his stirring celebration – borrowed from NBA star James Harden – when he grabbed his second after 15 minutes.

When Timo Werner failed to connect with a Reus cross, Gnabry was on hand to fire in another shot which went in off Yurchenko’s boot and the post.

Germany were in full control.

Reus fired in after a neat flick from Werner, who grabbed one just before the break when Joshua Kimmich chipped over the defence and Goretzka squared to the unmarked Chelsea striker to make it 4-0 at the break.

The Germans’ fifth goal came seven minutes after the break when Kimmich’s corner eventually fell at the feet of Hofmann, playing out of position at right-back, and the Moenchengladbach winger fired in from 20 metres.

When the teams last met in a friendly just before the 2014 World Cup, Germany handed out a 6-1 thumping and this performance was reminiscent of the days when the Germans returned from Brazil with the world title seven years ago.

At 5-0 up, the Germans could afford to try out new combinations as both 19-year-old Red Bull Salzburg forward Adeyemi and Hoffenheim defender David Raum made their debuts in the final 20 minutes.

The sixth goal came when Adeyemi swapped passes with Wirtz and fired home in added time.