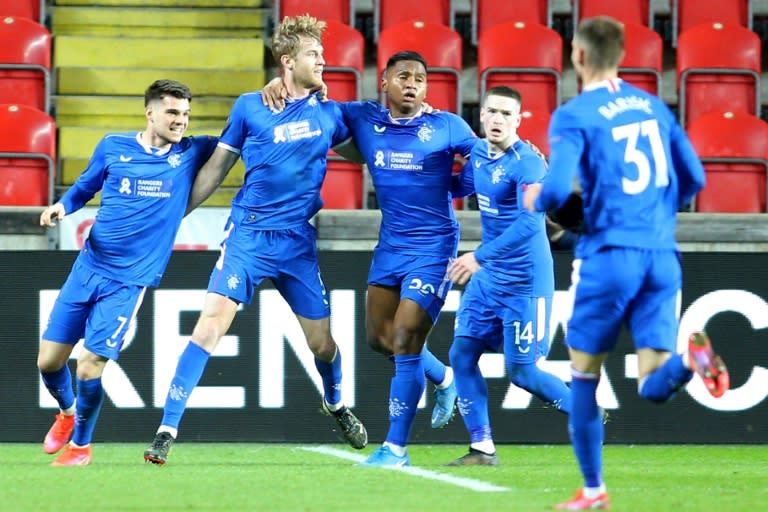 Rangers survived the absence of manager Steven Gerrard and several players due to a coronavirus outbreak to beat Celtic 1-0 at Ibrox in the first Old Firm derby of the season on Sunday.

Swedish defender Filip Helander scored the only goal of a tight contest to condemn Celtic boss Ange Postecoglou to defeat in the Australian’s first taste of the Glasgow derby.

Celtic were left to rue a huge missed opportunity by Odsonne Edouard in the first-half and Rangers took control after the break and got their deserved goal when Helander powered home Borna Barisic’s corner 24 minutes from time.

A difficult week for Rangers ended on a high despite the absence of their manager, both first-choice goalkeepers Allan McGregor and Jon McLaughlin plus captain James Tavernier, Scott Wright and Calvin Bassey.

Celtic’s bright run of form after a tough start to Postecoglou’s reign has come largely thanks to the goals of Kyogo Furuhashi.

But the Japanese played provider for what should have been the opening goal as his cross found Edouard six yards out, but the ball came off the French attacker’s heel and sped well wide.

Ryan Kent curled a long-range shot off the outside of the post with Rangers’ best effort of the first-half.

But the hosts looked sharper at the start of the second period and buoyed by the first Old Firm derby in front of a crowd since December 2019, took the lead when Helander rose above fellow Swede Carl Starfelt to power a header past Joe Hart.

Furuhashi forced Robby McCrorie into a save five minutes from time, but the stand-in goalkeeper kept a clean sheet as Rangers held out to move up to third in the table, three points ahead of Celtic.

WATCH: Are the Boston Celtics a better team than we think?