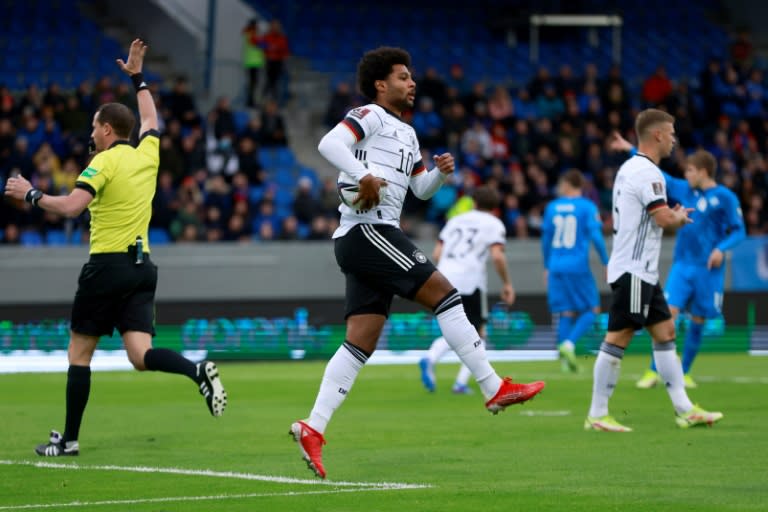 Serge Gnabry scored his third international goal in three days as Germany swept past Iceland 4-0 in Reykjavik on Wednesday to consolidate first place in their World Cup qualifying group.

The Germans asserted themselves in front of 3,600 fans at the Laugardalsvollur stadium with first-half goals by Gnabry and Antonio Ruediger before Leroy Sane added a third.

Gnabry also netted twice in Sunday’s 6-0 thrashing of Armenia in Stuttgart and has now scored 19 goals in 29 internationals.

“We didn’t let anything go to waste, we were dominant and strong in the challenges,” Germany captain Manuel Neuer told RTL.

“We are very satisfied. The trend is now set, we want to continue like this.”

Germany have won their three qualifiers in the last week under new coach Hansi Flick, scoring 12 goals without reply, and are four points clear in Group J having started September third in the table and three points adrift.

“They were teams that you don’t tend to see in the knockout rounds at tournaments,” said Neuer after victories over Liechtenstein, Armenia and now Iceland. “But it was important to set an example again.”

Flick made just one change from the side which thrashed Armenia as Manchester City’s Ilkay Gundogan replaced the injured Marco Reus.

Just as they did on Sunday, Germany flew out of the traps and Gnabry scored with less than four minutes played when he swept Sane’s cross into the net.

Iceland rallied and Germany goalkeeper Manuel Neuer had to punch away a Thorir Johann Helgason shot just before Ruediger headed in the visitors’ second goal from a Joshua Kimmich free-kick on 24 minutes.

Werner should have done better when his weak shot was saved by Iceland goalkeeper Hannes Halldorsson.

Iceland midfielder Johann Gudmundsson beat Neuer with a brilliant curling shot, which smashed onto the post and was tapped in by forward Albert Gudmundsson, but his effort was flagged offside.

Havertz also wasted a golden chance when he fired just wide with the goal at his mercy after the Germans broke from deep inside their own half.

Sane made no mistake when he smashed his shot into the roof of the net, after Goretzka’s defence-splitting pass, to make it 3-0 on 56 minutes before making way for Bayern Munich team-mate Jamal Musiala.

Werner then missed a sitter before Goretzka had a goal disallowed with Musiala offside in the build-up.

Musiala made amends when his deft flick led to Werner’s shot being palmed onto the post by Halldorsson before the ball rolled over the goalline.

Poland strike late to leave England with work to do