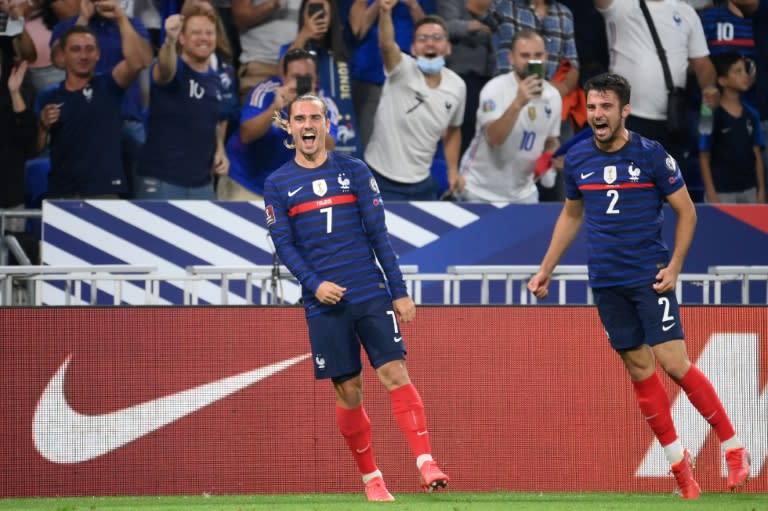 Antoine Griezmann’s double gave France a 2-0 victory over Finland in their 2022 World Cup qualifier on Tuesday and ended a run of five games without a win for the World Cup holders.

The 30-year-old Atletico Madrid striker’s brace took him level with Michel Platini on 41 goals for his country — 10 behind all-time leader Thierry Henry and five short of Olivier Giroud.

“I am very happy with my performance and immensely proud to have equalled Michel Platini,” Griezmann told TF1.

“This evening we were strong as we really needed this win after five draws, and we managed it in a nice manner.”

Victory will go some way to putting to bed the lingering memories of France’s traumatic loss on penalties to Switzerland in the last 16 at this summer’s Euro 2020.

The three points saw France extend their lead at the top of the table to seven points over the Finns, who have two games in hand.

“We did not do everything well but we have rediscovered our confidence,” said France coach Didier Deschamps.

“This puts our fate in our hands and we must finish the job in November.”

France piled on the pressure in the opening 10 minutes and forced a couple of corners whilst debutant Theo Hernandez went close with a shot from outside the area.

Although there was plenty of attacking intent from the hosts — Karim Benzema partnering Anthony Martial up front with Griezmann tucked in behind them — the French were alarmingly erratic in the early stages.

Paul Pogba had Deschamps out of his seat in the 14th minute in disbelief as the Manchester United midfielder fired a pass from the halfway line aimlessly over the Finnish byline without a French player anywhere near it.

The French defence also looked at sixes and sevens every time the Finns attacked in the first half.

Benzema forced the first save of the encounter in the 22nd minute, his fierce shot being turned over for a corner by Finnish stopper Lukas Hradecky after a neat 1-2 with Griezmann, who moved back to Atletico on loan from Barcelona in the summer transfer window.

Benzema turned provider three minutes later with a delightful backheel to release Griezmann inside the box.

Griezmann made no mistake and was rewarded with a hug and a slap on the back from Deschamps.

Griezmann made it 41 for his country when he beat Hradecky at the near post to make it 2-0 in the 54th minute.

The 30-year-old should have bagged his hat-trick as the clock ticked towards the hour mark after another sublime link-up with Benzema but his curling effort went wide of the post.

Benzema was denied the goal his powerhouse performance deserved as Hradecky got down well to block his effort with five minutes remaining.

The French came close to conceding a goal as the match neared full-time as Hernandez’s careless backpass let in Teemu Pukki but Lloris saved the day.