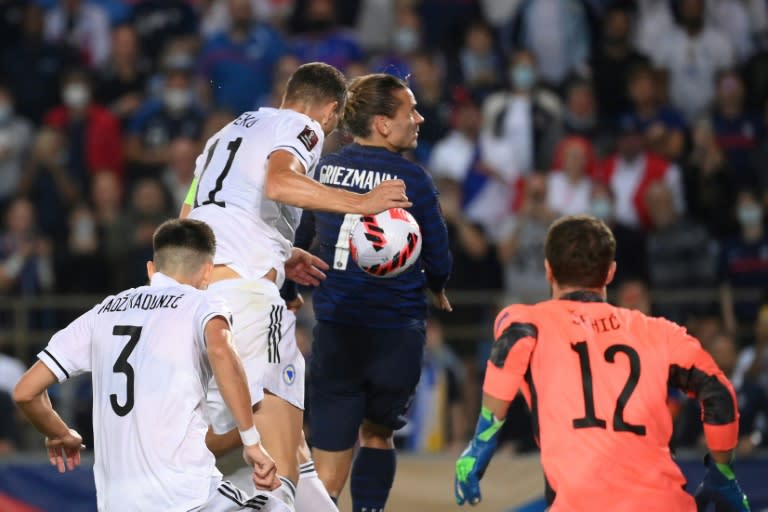 World Cup holders France needed a scrappy Antoine Griezmann equaliser before holding on with 10 men to draw 1-1 with Bosnia and Herzegovina as they resumed their campaign to qualify for the 2022 finals in Qatar.

Edin Dzeko gave Bosnia a first-half lead in Strasbourg on Wednesday but soon after his headed clearance ricocheted back off Griezmann and just crossed the line to restore parity.

France were then handicapped by the 51st-minute sending-off of Sevilla defender Jules Kounde for a terrible tackle on Arsenal’s Sead Kolasinac.

The frustrating result, following their disappointing last-16 exit at Euro 2020, nevertheless keeps France on course to top Group D and qualify automatically for the next World Cup.

They have eight points from four games, four more than second-placed Ukraine, who drew 2-2 in Kazakhstan on Wednesday and who host France in Kiev at the weekend.

“It is obviously harder with 10 men. We had some chances but it is not the result we were looking for,” admitted France coach Didier Deschamps to broadcaster M6.

“Of course we wanted the three points but these qualifying campaigns are difficult for everyone.

“We have one more point and we’ll need to go looking for more in the remaining matches.”

Both Kounde’s red card and the Griezmann goal brought into sharp focus the belated introduction of VAR by UEFA for the World Cup qualifiers — it was not in use in the first three rounds of matches in March but has now been hastily implemented across the continent.

Griezmann’s goal was shown to have crossed the line, despite the efforts of Bosnian goalkeeper Ibrahim Sehic to claw it away, after the Swiss officials reviewed the images.

Kounde had initially been shown a yellow card for his reckless tackle on Kolasinac but that was upgraded to red on review.

It was a disappointing night for France but they were perhaps not helped by having two of their most important players distracted by transfers — one that happened and one that did not — right up to Tuesday’s deadline.

Kylian Mbappe ended up staying at Paris Saint-Germain despite Real Madrid’s offensive to bring him to the Bernabeu.

Griezmann, meanwhile, made a late loan switch from Barcelona back to his old club Atletico Madrid, a move that was not confirmed until the early hours of Wednesday.

They both started in France’s first outing since Mbappe’s miss from the spot saw them go out to Switzerland in a shoot-out in Bucharest in the European Championship.

France, 1-0 winners in Bosnia in March, fell behind in the 36th minute.

Thomas Lemar ceded possession in his own half and the ball came to Inter Milan striker Dzeko, Bosnia’s captain drilling a low shot beyond Hugo Lloris from the edge of the box.

France, who had earlier seen Mbappe hit the outside of the post, were not behind for long.

Dzeko rose at the near post to clear a corner, only for the ball to hit the back of Griezmann and rebound towards goal via the thigh of a Bosnian defender.

Sehic just failed to prevent it from crossing the line, but Kounde’s challenge changed the course of the second half, leaving France a man down.

Kolasinac had to come off too, and this was perhaps an opportunity missed for Bosnia.

Record-setting day for Ronaldo in win