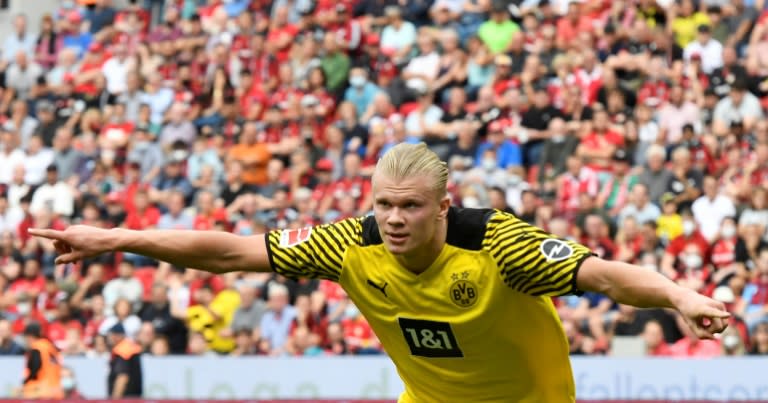 Borussia Dortmund expect a highly-charged atmosphere at Besiktas on Wednesday where the visitors’ “world-class” striker Erling Braut Haaland is looking to add to his 20 Champions League goals.

Last season, Haaland claimed records as the youngest player to reach the milestone of 20 Champions League goals in the fewest games, which he managed in just 14.

This season, the 21-year-old has knocked in 13 goals for Norway and Dortmund, for whom he scored twice Saturday to seal a 4-3 win at Leverkusen, whose coach Gerardo Seoane described Haaland as “world-class”.

The towering Norwegian was pelted with beer cups by Leverkusen fans during his celebrations after converting a late penalty and Dortmund expect another charged atmosphere in Istanbul.

“It’ll be another very emotional game. The Turkish fans will make sure of that, but we have the means to stand up to Besiktas,” said Dortmund’s licenced players director Sebastian Kehl.

Haaland has a habit of shining in the Champions League, where he has scored 12 goals in 10 games for Dortmund after netting eight times in six matches for his previous club Red Bull Salzburg.

The Norwegian goal-machine has a release clause in his contract of 75 million euros ($88 million) which becomes active in 2022.

Haaland is under contract until 2024 and Dortmund have repeatedly said they will not let him leave unless they have to.

“Our position is clear — I don’t have to play the parrot all the time,” said sports director Michael Zorc at the start of the month.

Dortmund will need Haaland’s goals if they are to reach the Champions League’s knock-out stages, having bowed out to Manchester City in the quarter-finals last season.

The Germans are favourites to win their group, which also contains Ajax and Sporting Lisbon.

Dortmund need to fix their leaking defence, which has conceded nine goals in four Bundesliga games and German centre-back Mats Hummels could return after a knee injury.

The Germans must contain Besiktas striker Michy Batshuayi, on loan from Chelsea, who scored nine goals in 14 games for Dortmund in 2017/18.

The Belgian netted twice in Saturday’s 3-0 win over Malatyaspor in the Turkish league.

Goran Dragic with a 2-pointer vs the Boston Celtics

Sixers player grades: Kevin Durant proves too much for Sixers in Nets win

Fred VanVleet with a deep 3 vs the Boston Celtics