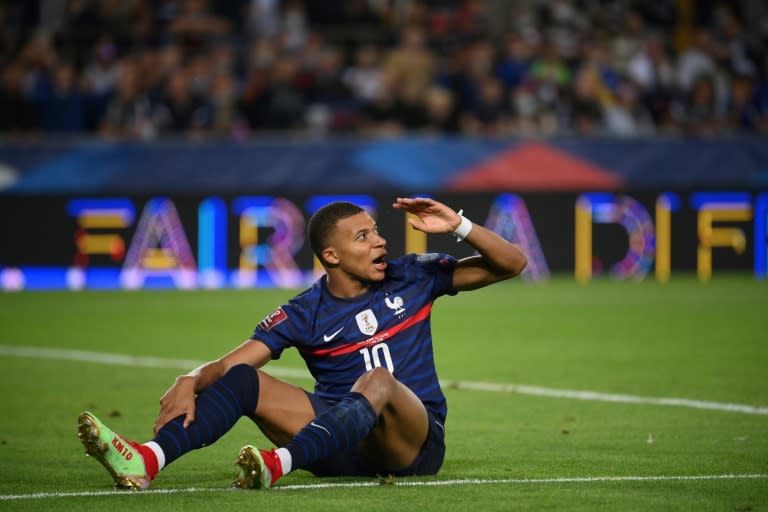 Kylian Mbappe has withdrawn from the France squad after suffering a right calf injury and will miss two World Cup qualifiers, the French Football Federation (FFF) said on Thursday.

The Paris Saint-Germain striker felt “pain” in his calf during France’s home draw with Bosnia and Herzegovina on Wednesday.

He underwent examinations on Thursday and returned to PSG before the France squad left on Friday for Kiev, where they face Ukraine on Saturday. They then host Finland on Tuesday in Lyon.

The FFF said Mbappe would not be replaced in the group. Kingsley Coman, an unused substitute on Wednesday, and Anthony Martial are other attacking options for coach Didier Deschamps.

Mbappe has had a hectic few days.

Amid rumours that he was about to move to Real Madrid, he scored both goals as PSG won at Reims on Sunday in a game that marked Lionel Messi’s first appearance for the club.

When the transfer window closed on Tuesday Mbappe was still at PSG.

On Wednesday, he came off in the final minute as 10-man France drew in Strasbourg.

His withdrawal means that between injuries and Covid-19, Mbappe will have missed 10 of France’s last 26 games.

France remain top of Group D, but the loss of Mbappe is an additional blow for Deschamps.

Since the squad assembled on Monday, Dayot Upamecano, N’Golo Kante, Corentin Tolisso, and now Mbappe have all had to leave.

Earlier on Thursday, defender Nordi Mukiele was recalled to fill in for defender Jules Kounde, suspended for the next game after his red card on Wednesday. Matteo Guendouzi and Adrien Rabiot, called up on Wednesday, also arrived on Thursday.