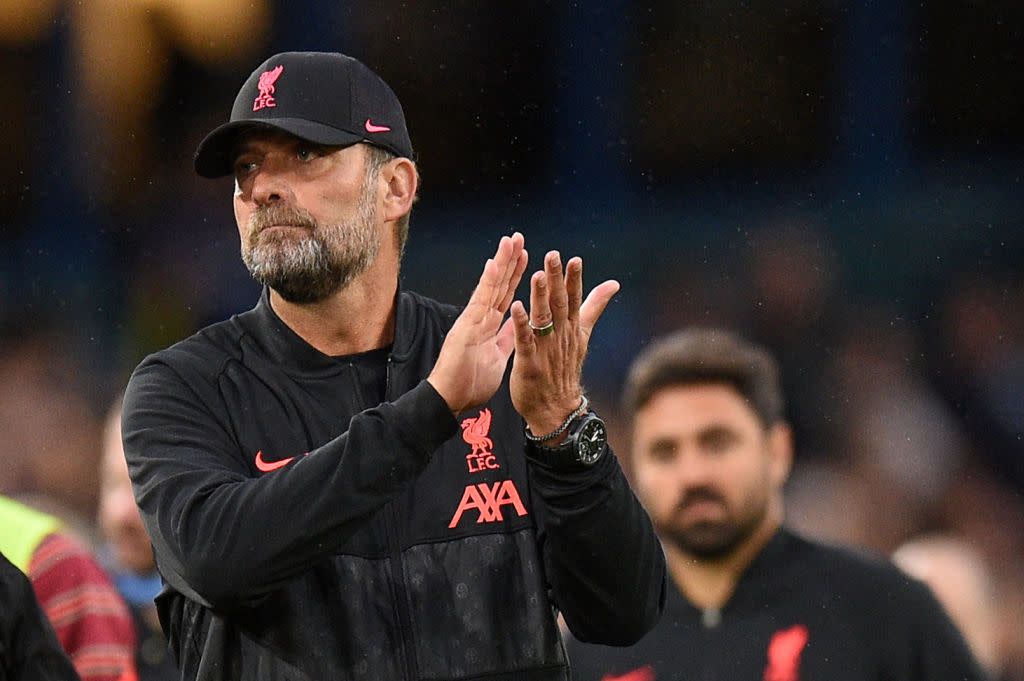 Jurgen Klopp and players from Liverpool gave their reaction to the horrible scenes they saw play out live in front of them, as Harvey Elliott went down with a serious injury in their win at Leeds.

Speaking after the game, Klopp and his players were clearly very emotional as the 18-year-old midfielder suffered a serious lower leg injury in the 3-0 win.

Harvey Elliott has been superb for Liverpool this season and is a rising star in the Premier League.

Jurgen Klopp and his players appeared to be shaken by the injury, and discussed their feelings post-game.

Reaction from Elland Road from both teams:

Jurgen Klopp spoke to our partners at Sky Sports in the UK on Harvey Elliott’s injury:

“It is a bad injury. Ankle. I heard it was dislocated and we could put it back. He is now in the hospital,” Klopp said. “He is an incredible player. Now he’s out. Do I want a young boy having such an experience early in his career? No I don’t. Obviously he’s a top player. I could see his foot was not in the right place. We were all shocked.”

Klopp then lauded Elliott, and said Liverpool will be waiting for him to return from injury as they need him and his quality on the pitch.

The Liverpool boss was obviously downbeat and looked very sad when talking about the injury.

Klopp added that he spoke to the referee and said it ‘wasn’t the right moment to speak about these kind of things.’

Virgil van Dijk has been speaking to NBC Sports at Elland Road about the injury:

The Dutch defender added that is such a shame that Elliott has suffered this injury at this time, after he started the season so well and was given plenty of trust by Jurgen Klopp.

Trent Alexander-Arnold has had this so say about Harvey Elliott:

“No one quite knows the extent of it, or how long he’s going to be out for or the extend of it. If you go off like that. It is never looking very good. It is a real shame for him and for us. We are going to lose a good player for some time,” Alexander-Arnold said.

“He’s an amazing talent and someone who was looking to break through this season and started the season so, so well. It is disappointing for us, massively disappointing for him. Our thoughts are with him and his family. Hopefully it is not too serious. We are trying to be as optimistic as possible here.”

Stuart Dallas, Leeds’ Northern Irish midfielder, has told our partners in the UK at Sky Sports the following:

“First and foremost our thoughts go to Harvey Elliott. It’s a horrible injury and we hope he gets back on the pitch as soon as possible.”

Leeds striker Patrick Bamford spoke to NBC Sports about the injury to Elliott:

“All of our thoughts at Leeds are with Harvey. It is a horrible injury and he’s a top young player.”

Bamford then added that Pascal Struijk didn’t mean to hurt Elliott and there was no intention to harm whatsoever in his challenge.

Leeds boss Marcelo Bielsa had this to say to our partners in the UK at Sky Sports:

“I regret dearly the opponent was injured and I’m 100 per cent certain our player did not have a bad intention. I wish it had not happened.”

Bielsa added this to the BBC:

“For that to happen to any player is saddening. For a young player playing at a high level even more. I am sure my player did not have the intention to harm him in any way. Perhaps what happened after he recovered the ball caused the injury. The tackle was clear but clearly the acceleration at how our player moved caused it. In no way did he have provoke any harm to the opponent.”

After suffering a serious lower leg injury, 18-year-old star Harvey Elliott has sent out the following message from Instagram.

Marc Gasol to stay in Spain, reportedly finish out career with Girona