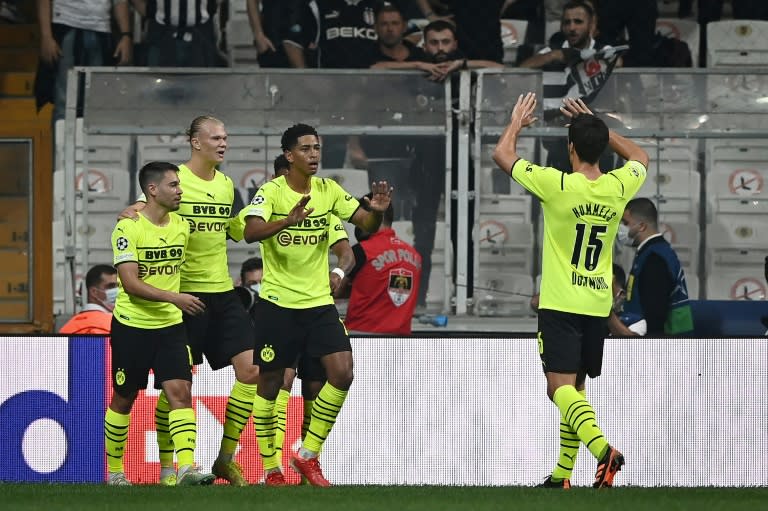 England midfielder Jude Bellingham shone with a goal, then an assist and a kiss for Erling Haaland as Borussia Dortmund kicked off their Champions League campaign with a 2-1 win at Besiktas.

Bellingham silenced the boisterous crowd in Istanbul with the opening goal and then unpicked the home defence to serve up a simple tap-in for Haaland to claim his 21st goal in his 17th Champions League game.

It stayed 2-0 until Javi Montero headed in a consolation goal for Besiktas deep in added time.

“It’s a brilliant atmosphere and a pleasure to play in front of these fans,” Bellingham told DAZN, “but the most important thing was to put in that performance and get the win.

“It was end to end, a bit like basketball, but we were just more clinical.”

Haaland was full of praise for Bellingham, who planted a kiss on his team-mate’s cheek during his post-match interview.

The towering striker underlined his reputation as a prolific scorer, taking his tally to 14 goals in 10 games this season for Dortmund and Norway.

“It was a really hard game, the pitch wasn’t good, but we fought and did good, so I am happy with the win,” said Haaland.

Haaland and Bellingham bumped chests to celebrate the second goal, but the club reportedly faces a fight to keep both young stars past this season with Europe’s elite tracking the pair.

His contract has a release clause, which becomes active next year, that could see him leave for 75 million euros ($88 million).

Likewise, a host of Premier League clubs such as Manchester City, Liverpool and Chelsea are chasing Bellingham.

When asked if he can win the Champions League with Dortmund, Haaland chose his words carefully.

“I don’t think too much about that, I go game to game, but that is my dream and I will try to do that in my life.”

Only a one-handed save by Dortmund goalkeeper Gregor Kobel after six minutes denied Besiktas striker Michy Batshuayi, who is on loan from Chelsea.

Yet it was one-way traffic for the rest of the first half.

The Besiktas crowd was hushed when Bellingham latched onto Thomas Meunier’s cushioned volley in behind the defence and fired between the legs of Besiktas goalkeeper Ersin Destanoglu.

Dortmund doubled the lead just before half-time when Haaland tapped in after Bellingham’s mazy run.

The Besiktas team made a point of applauding their vocal supporters before trudging off 2-0 down at the break.

Dortmund were denied their first clean sheet in over five weeks when Montero got on the end of a Pjanic free-kick in stoppage time.

ESPN predicts Celtics to finish sixth in the Eastern Conference