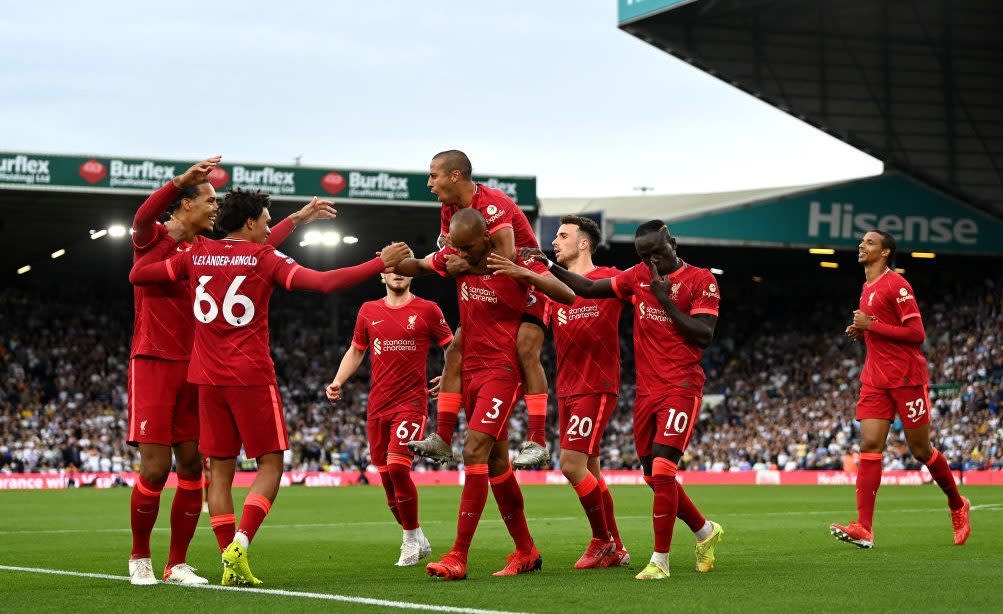 Leeds vs Liverpool was a one-sided affair, as the Reds won easily, but their victory was overshadowed by a horrendous injury to Harvey Elliott.

Mohamed Salah scored his 100th Premier League goal to set a rampant Liverpool on their way to victory, while the excellent Fabinho added a second and Sadio Mane scored a third late on.

Elliott, 18, then suffered what looked like a very serious injury as Liverpool eased to victory but Jurgen Klopp will be devastated to potentially lose the rising star for most, if not all, of the 2021-22 season.

Liverpool sit third in the table, level on points with Manchester United and Chelsea above them after three wins and a draw from their four games so far.

Marcelo Bielsa’s Leeds are still searching for their first win of the Premier League season after two defeats and two draws.

1. Salah the machine keeps rolling: Only Harry Kane, Sergio Aguero, Alan Shearer and Thierry Henry have scored 100 Premier League goals faster than Salah. That says it all. Whatever you think about the Egyptian forward, he continues to be consistently excellent and deliver the goods when Liverpool need him. He has surpassed all of the expectations anyone had of him when he arrived at Anfield and is so ruthless. What an incredible machine he is.

2. Elliott injury looks awful: Elliott was tackled by Pascal Struijk in the second half at Elland Road and Mohamed Salah immediately signalled to the bench for help for his teammates. It looks as though Harvey Elliott suffered an ankle or lower leg injury, as he appeared to get his foot stuck in the ground as the tackle came in and Struijk landed on his lower leg. Struijk was sent off for the challenge, as replays of the injury to Elliott were not shown across NBC Sports’ platforms due to the horrendous nature of the impact and aftermath. Liverpool will be wishing him a speedy recovery as he’s been superb for Jurgen Klopp’s side this season. Elliott has a bright future in the game and everyone will be hoping he makes a positive recovery from this awful injury.

3. Another slow start for Leeds: Just like last season Bielsa’s boys have started sluggishly. Leeds had four wins in their opening 12 games last season and they have yet to win this season, losing heavily against Liverpool and Manchester United, then drawing against Everton and Burnley. Leeds will be just fine, but they will also be wary of a Sophomore slump and that old cliche of ‘teams have figured them out’ but surely Bielsa will have a few tricks up his sleeve.

Man of the Match: Sadio Mane – He was absolutely sensational throughout and finally got his goal late on. Missed plenty of chances but never gave up. Set the tone for Liverpool’s win.

Leeds had a great chance early on as Raphinha set up Rodrigo, but his shot was straight at Alisson.

Liverpool started well, as Trent Alexander-Arnold whipped in a cross towards the back post but it just evaded his teammates.

Sadio Mane had a shot deflected wide and Diogo Jota had a shot pushed over by Illan Meslier.

Salah slotted home the opener, as Liverpool got the goal their fine start deserved. Joel Matip surged forward after a patient move and Trent Alexander-Arnold crossed for Salah to finish.

Thiago Alcantara headed home what looked to be Liverpool’s second goal, but Salah was clearly offside in the build up and the goal was chalked off.

Jota then got free and squared for Mane at the back post, but the ball was just behind him and the Senegalese forward put his effort over the bar.

In the second half more of the same occurred as Mane raced free after a rapid counter attack, and as Salah looked certain to score, Leeds somehow cleared.

From the resulting corner, Liverpool doubled their lead. Alexander-Arnold’s corner was nodded towards goal by Van Dijk and the second attempt Fabinho finished.

Substitute Tyler Roberts had a couple of chances for Leeds, as the game remained open.

An awful moment then arrived as Pascal Struijk tackled Harvey Elliott strongly and the Liverpool youngster was stretchered off after appearing to suffer a serious lower leg injury. Struijk was sent off by referee Craig Pawson for the challenge.

Elliott, 18, was consoled on the pitch by players and staff from both teams, as he was given a standing ovation by the Elland Road crowd.

Mane gets his goal

Liverpool lost their focus a little after that injury, but Mane went close and so did Patrick Bamford who almost lobbed home from 45 yards.

Mane did get his goal in stoppage time to seal a thumping Liverpool win.

Who were the teams that passed on Paul Pierce in the draft – and did they regret it?