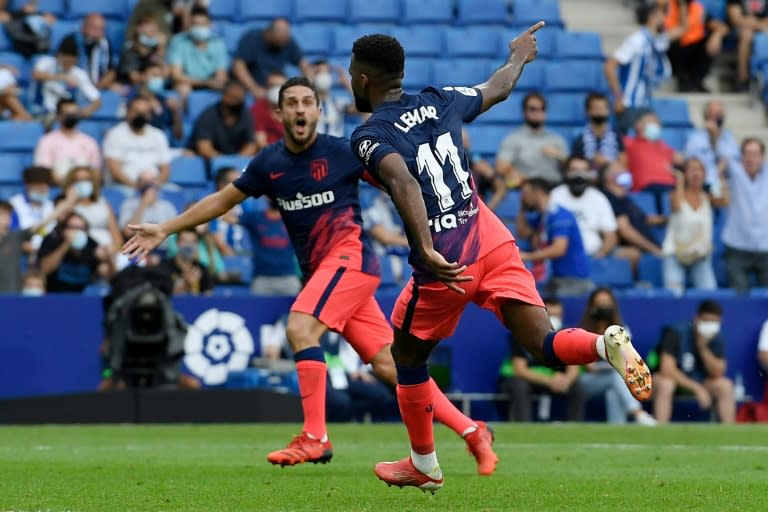 Thomas Lemar drove in a 99th-minute winner as Atletico Madrid came from behind to beat Espanyol 2-1 on Sunday and ensure Antoine Griezmann’s first game back with the club ended with a victory.

The excellent Lemar struck in the ninth of 10 minutes of added time at the RCDE Stadium to sink an exhausted Espanyol and give La Liga’s reigning champions a third victory from their opening four games.

Griezmann was replaced by Joao Felix in the 58th minute, an underwhelming return for the Frenchman symptomatic of a lethargic Atletico, who only sprung into life late on.

Yannick Carrasco was the catalyst, firing in with 11 minutes left of normal time before Lemar completed a dramatic comeback by surging through midfield and finishing into the far corner.

Atletico maintain their unbeaten start while Espanyol are still searching for their first victory since returning to La Liga themselves, following a year spent in Segunda.

It had been two years and four months since Griezmann had last worn an Atletico shirt, with his return from Barcelona, initially on loan, appearing like something of a coup for the club that sold him for 120 million euros in 2019.

Yet Atleti won the league without Griezmann and signed Luis Suarez and Joao Felix while he was away, leaving Diego Simeone with a challenge now to squeeze all his attacking talents into the starting line-up.

Felix was the one to drop out this time as Griezmann and Suarez started up front together, with Angel Correa and Marcos Llorente in support.

But Atletico struggled for creativity and Griezmann, apart from a header over the crossbar, was quiet. Instead, it was the substitutes — Felix, Renan Lodi and Lemar in particular — who took Atletico to a different gear.

“He was good in the first half, when we weren’t,” insisted Simeone. “We didn’t create enough speed and Espanyol played much better, they were more dynamic, more intense, stronger, they hurt us.”

“The five players who came on changed the game,” he added.

Espanyol could have taken the lead sooner after Adri Embarba twice tested Jan Oblak while Raul de Tomas went through and round the Atletico goalkeeper only to see his finish cleared off the line by Felipe.

But five minutes before half-time, they got the opener they deserved, De Tomas darting away from Marcos Llorente and glancing a brilliant header across the goal and into the opposite corner.

Atletico improved after the break and thought they had an equaliser when Lemar diverted in Llorente’s cross, only for the goal to be chalked off, VAR showing Luis Suarez to have been offside.

He and Renan Lodi twice exchanged passes down the left, as Lodi pulled the ball back off the line for Carrasco, who held off three defenders, lost the ball and then won it back, before firing inside the far post.

Espanyol were hanging on in the final minutes and Lemar stepped forward, driving through midfield, latching onto Carrasco’s flick and unleashing a shot that the weak hand of Diego Lopez was unable to keep out.