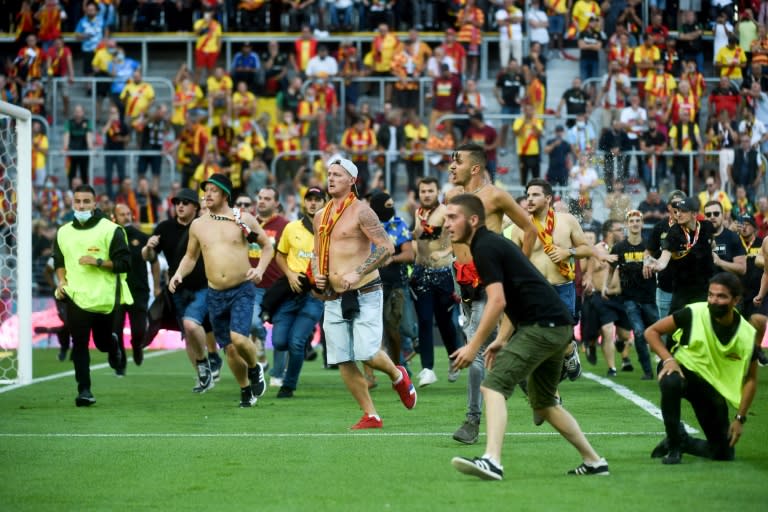 Lens defeated reigning French champions Lille 1-0 on Saturday in a northern derby overshadowed by a pitch invasion that delayed the start of the second half by 30 minutes.

Dozens of Lens supporters stormed the Stade Bollaert-Delelis pitch at half-time to confront the visiting Lille fans nestled away in a corner of the ground after tensions flared with other spectators.

Riot police intervened to separate the factions of opposing supporters as both sets of fans hurled seats at each other over a partition wall.

“We’re in the process of trying to get a clear view. It unfolded in some confusion. Of course, any act of violence is condemned by Lens,” said the club’s managing director Arnaud Pouille.

“Unfortunately the region’s image is affected by what happened.”

“I have a precise idea of the facts but I don’t want to influence anyone,” he added. “You’ve seen the images. There were some gestures that sparked things and a reaction which is damaging.”

Six people sustained minor injuries and police made two arrests, according to the Lens sub-prefect.

The trouble comes the week after Nice were docked a point following the ugly incidents that led to their August 22 home match with Marseille to be abandoned.

That game will be replayed at a neutral venue on October 27. Nice were also ordered to play three matches behind closed doors.

A clash between Montpellier and Marseille on the opening weekend of the season was also interrupted for about 10 minutes after fans threw bottles onto the pitch.

“This start of the season is not going to help us. A reality check is quickly needed for everyone involved in football, starting with supporters,” tweeted French sports minister Roxana Maracineanu.

Poland midfielder Przemyslaw Frankowski scored the winning goal on 74 minutes as Lens climbed up to second in Ligue 1, unbeaten through six games and three points adrift of Paris Saint-Germain, who host Lyon on Sunday.

“They told us there had been some incidents between supporters, for us to focus on ourselves and that we would restart,” said Lens goalkeeper Jean-Louis Leca.

“It’s always annoying when supporters come to blows in a football stadium. They too have to set an example because there are kids in the ground.”

Lille have won just once under new coach Jocelyn Gourvennec and lie 13th with only five points.

“I find the defeat harsh because we basically gave nothing away. We were beaten by a half-chance,” said Gourvennec, who replaced Christophe Galtier following his move to Nice in the summer.

“We’re falling behind in the championship by dropping points. We’ve got to do more.”

South Korea forward Hwang Ui-jo scored twice to earn Bordeaux their first win of the season — a 2-1 victory away to fellow strugglers Saint-Etienne.

Hwang’s opening goal was cancelled out by Wahbi Khazri, but he ensured Bordeaux moved off the foot of the table with the winner 10 minutes from time.

Bordeaux rose to 14th, level on points with Lille, leaving Saint-Etienne second from bottom and one of just three clubs yet to win in the French top flight this term, along with Brest and Metz.