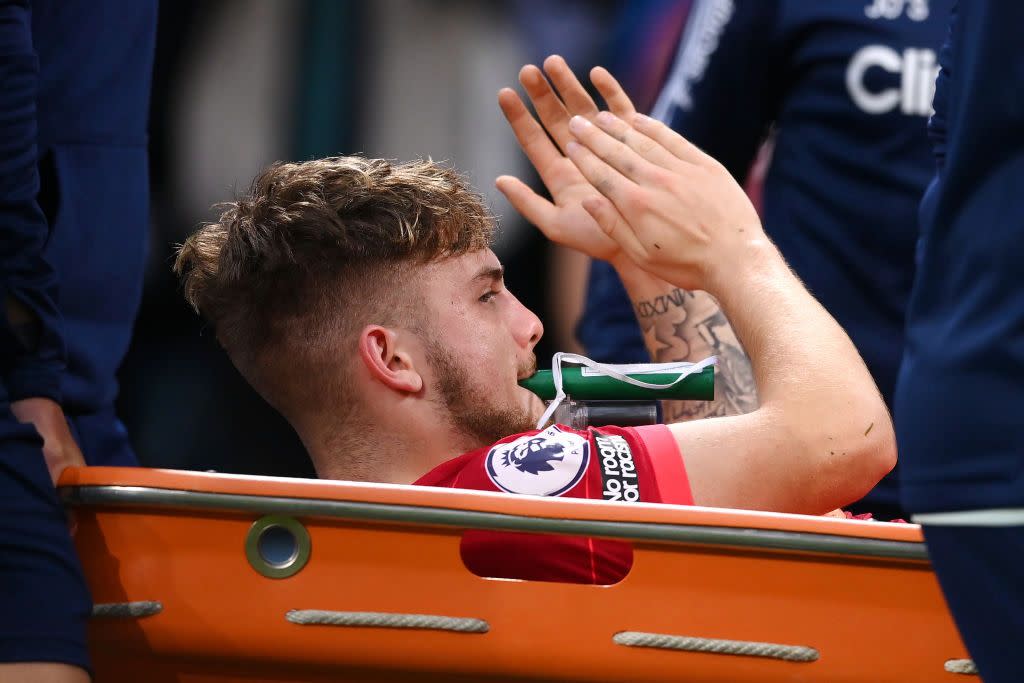 Harvey Elliott, 18, looks to have suffered a horrific injury as the Liverpool youngster was stretchered off the pitch at Leeds United.

Elliott was tackled by Pascal Struijk in the second half at Elland Road and Mohamed Salah immediately signalled to the bench for help for his teammates.

It looked as though Harvey Elliott suffered an ankle or lower leg injury, as he appeared to get his foot stuck in the ground as the tackle came in and Struijk landed on his lower leg.

UPDATE: Liverpool have released the following statement, confirming that Elliott will undergo surgery “in the coming days”…

Liverpool Football Club can confirm Harvey Elliott has been discharged from hospital after suffering a serious ankle injury in the game against Leeds United on Sunday.

The 18-year-old was stretchered from the field at Elland Road after sustaining the injury in a challenge midway through the second half.

Elliott will be required to undergo surgery in the coming days and the club will offer a further update on his prognosis in due course.

Harvey, his family and Liverpool FC would like to place on record their thanks to the paramedics and all the staff at Leeds General Infirmary for the care and treatment given.

Struijk was sent off for the challenge, as replays of the injury to Elliott were not shown across NBC Sports’ platforms due to the horrendous nature of the impact and aftermath.

It has been reported that referee Craig Pawson sent off Struijk for “the intensity and endangerment of Harvey Elliott.”

The Liverpool youngster has since posted a message on Instagram, as he was in an ambulance after the incident.

“Thank you for your messages, guys! Road to recovery. YNWA!” Elliott said.

What happened to Harvey Elliott?

Both sets of players then consoled the youngster on the pitch, as he was carried off and was able to applaud the fans in the stadium who gave him a standing ovation.

Elliott was given what looked like oxygen and painkillers to help ease the pain as he was carried off the pitch.

Jurgen Klopp and his coaching staff did their best to try and keep the Liverpool players focused as Klopp seemed to be shouting “for him” or “for Harvey” to his players.

If this injury is a bad as it looks, this is such a cruel blow for Elliott.

The Fulham academy product enjoyed a superb season on loan at Blackburn Rovers in 2020-21 and has returned to Liverpool and become a starter this season.

Elliott has been lauded by Klopp early in the season and his creativity, pace and ability to carry the ball has seen him become one of the best young talents in the Premier League.

The entire world will be wishing Elliott the best and for a speedy recovery.

Mane gets his goal for Liverpool v. Leeds United