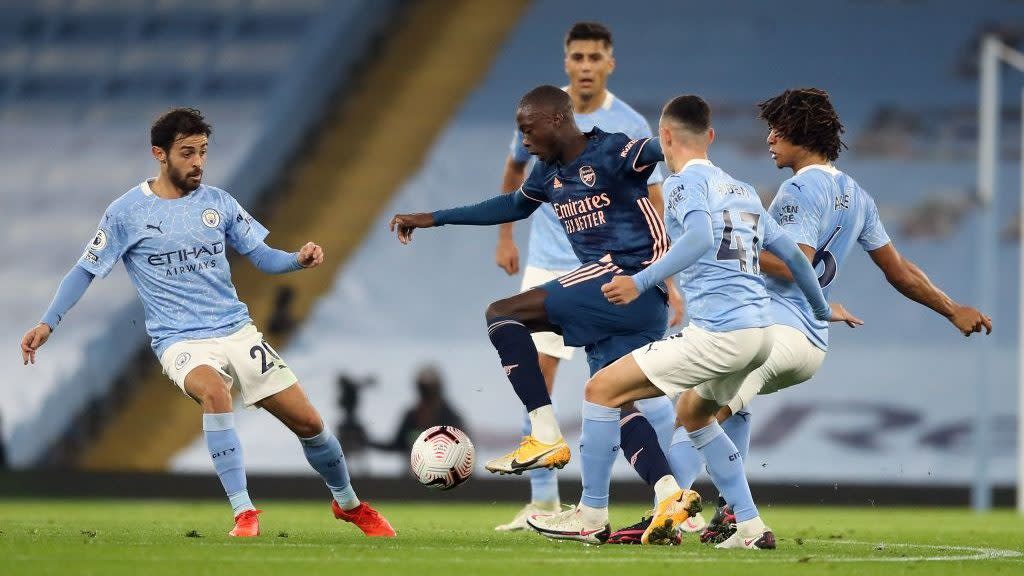 Arsenal hopes a midweek battering of a lower division side opens its doors for an upset of reigning champions Manchester City at the Etihad Stadium on Saturday (start time 7:30am ET on NBCSN and online via Peacock Premium).

Pep Guardiola’s men rebounded from an opening loss to Tottenham to throttle Norwich City 5-0 and now will hope to heap woe on former assistant coach Mikel Arteta and Arsenal.

Arteta’s men started 0-2 but were without Pierre-Emerick Aubameyang and Alexandre Lacazette amongst other absences. Aubameyang scored a hat trick at midweek in the League Cup.

Here’s everything you need to know ahead of Man City vs Arsenal.

Benjamin Mendy has been suspended after being charged with sexual assault, while Phil Foden’s ankle and Kevin De Bruyne’s ankle are both keeping them out of of the lineup. Liam Delap remains out.

The Gunners are still far from full health, as Ben White (COVID-19), Thomas Partey (ankle), and Eddie Nketiah (ankle) are out. Hector Bellerin (thigh) and Gabriel (knee) could play and Willian is a long shot after a positive COVID test but Bukayo Saka is looking good to be available.

Arsenal did rebound a little at midweek but the upshot of that is they had to play midweek. A rested Man City is without some key pieces but expect the hosts to have the most of everything. Man City 3-1 Arsenal.

How to watch Man City vs Arsenal stream and start time