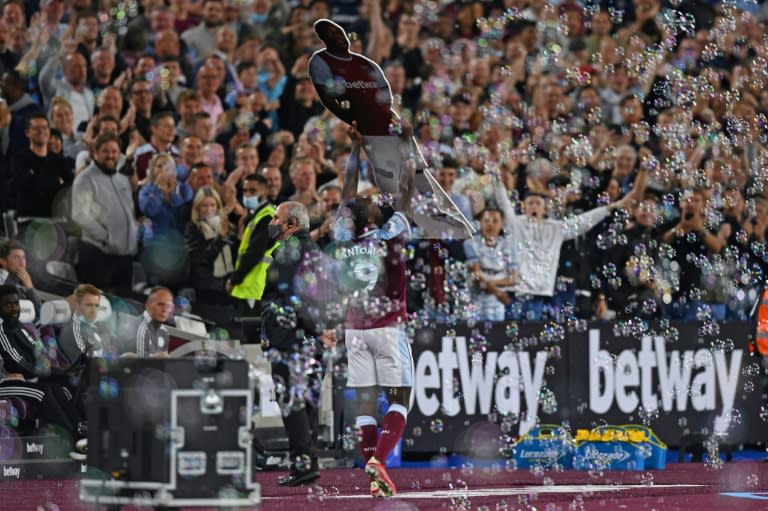 Michail Antonio left West Ham manager David Moyes unimpressed with his celebration when he became the club’s record goalscorer in the Premier League but his double in the 4-1 win over Leicester “shut the manager up.”

Antonio grabbed a cardboard cut out of himself after his first goal which saw him move on to 48 one ahead of Paulo di Canio’s old mark.

The 31-year-old then performed a waltz with the cut-out, lifted it and kissed it.

“It’s not something I’m keen on,” said Moyes.

Antonio — who joined West Ham for £7 million ($9.5million) from Nottingham Forest in 2015 — was so caught up in setting the new record he confused the film that he replicated the scene from.

He said at first it was from the 2001 film ‘Save The Last Dance’ when in fact it was an iconic scene from 1987 hit movie ‘Dirty Dancing’ — starring the late Patrick Swayze and Jennifer Grey.

“Score the goal, make history, nail the celebration, get the film name wrong in the interview. Baby forgive me! #DirtyDancing4Life,” he tweeted.

Antonio — who moved onto 49 goals later in the match as the Hammers went top of the table after two games — explained a lot of thought had gone into the celebration which took place in front of a packed London Stadium.

“We were talking earlier in the week, and I said ‘you know what will be the best celebration? Save The Last Dance’,” said Antonio.

“Maybe somebody could pick me up like Baby? But I got a cardboard cut-out and picked that up.”

Moyes — whose side’s early performances have franked the form they showed last term when they finished sixth and qualified for the Europa League — was far happier with Antonio scoring a double in the second-half after being criticised by him at the half-time break.

“I was disappointed with the way he played in the first half but he did enough to shut the manager up after what I said to him at half-time.

“He’s only been at centre-forward for the last 18 months or two years.

“He’s gone on from there and he’s looking a real handful. His all-round play has improved so much.”