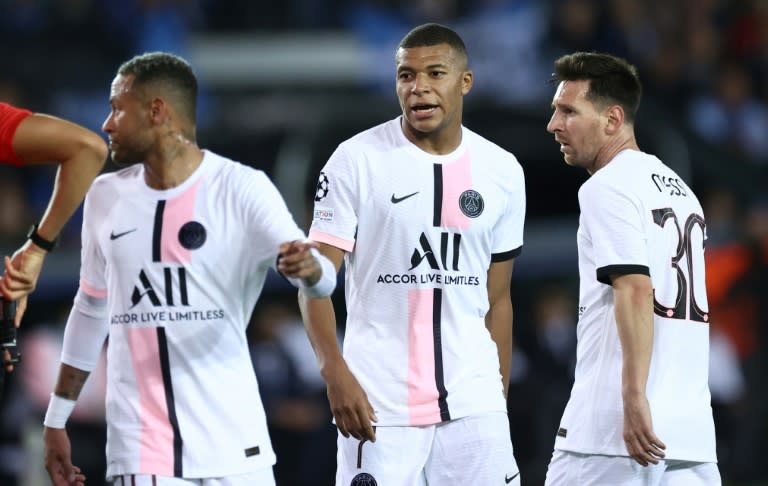 The reaction in France to the all-star Paris Saint-Germain’s Champions League bow against Club Brugge in midweek has been unforgiving.

PSG, football’s new galacticos following the arrival of Lionel Messi, were dismissed as “ghost-like” by sports daily L’Equipe as they escaped with a 1-1 draw against the Belgian champions on what was the Argentine’s first start for his new club.

Messi teamed up with Kylian Mbappe and Neymar for the first time but, as Le Parisien put it, “the dream of seeing the ‘MNM’ together almost turned into a nightmare”.

A draw away to, on paper, the weakest team in their Champions League group puts Mauricio Pochettino’s side -– among the leading pre-tournament favourites to win European club football’s biggest prize -– up against it just to reach the last 16.

They play Manchester City next and still have to face RB Leipzig, two teams that beat PSG in last season’s Champions League.

The game in Bruges served as a reminder that the Qatar-owned club cannot simply rely on Messi, Neymar and Mbappe to win games, even if the latter set up their goal for Ander Herrera.

They desperately missed the suspended Idrissa Gana Gueye and the injured Marco Verratti in midfield.

Angel di Maria was suspended. At the back, Sergio Ramos has still not played because of injury.

“We must improve, we know that,” said Pochettino.

“We have a magnificent squad, but we need balance, to be creative going forward but solid at the back. We need time for that.”

It is concerning when compared with Pep Guardiola’s City, who thumped Leipzig 6-3 in midweek and come to Paris later this month.

By then Messi will at least have had three more matches to get used to his new team-mates, starting with Sunday’s home meeting with Lyon, PSG’s biggest test yet domestically.

PSG have a 100 percent record so far in Ligue 1 and have scored 16 goals in their five outings but they face a Lyon side that is in form and beat Rangers 2-0 in Glasgow in the Europa League on Thursday.

The 33-year-old German World Cup-winning centre-back was a surprise signing by Lyon as the transfer window shut at the end of last month, penning a two-year contract after arriving from Bayern Munich on a free transfer.

Boateng, who was a regular for Bayern last season, made his Lyon debut off the bench in their 3-1 win over Strasbourg last weekend and started against Rangers in Glasgow.

The former Manchester City player has had other issues to worry about it since arriving at his new club — last week he was given a 1.8 million-euro ($2m) fine by a German court for assaulting an ex-girlfriend three years ago.

Seeking to focus on football in the face of his legal woes, Boateng will come up against PSG’s superstar attack this weekend when Lyon go to the Parc des Princes.

5 – PSG have won their first five Ligue 1 games of a season for the third time in their history, and the third time in five years. They went on to be champions in 2017/18 and 2018/19 after starting in identical fashion.

24 – The number of minutes Messi has played in Ligue 1 so far.

0 – Nice are the only team yet to concede a goal in any of Europe’s big five leagues so far this campaign.