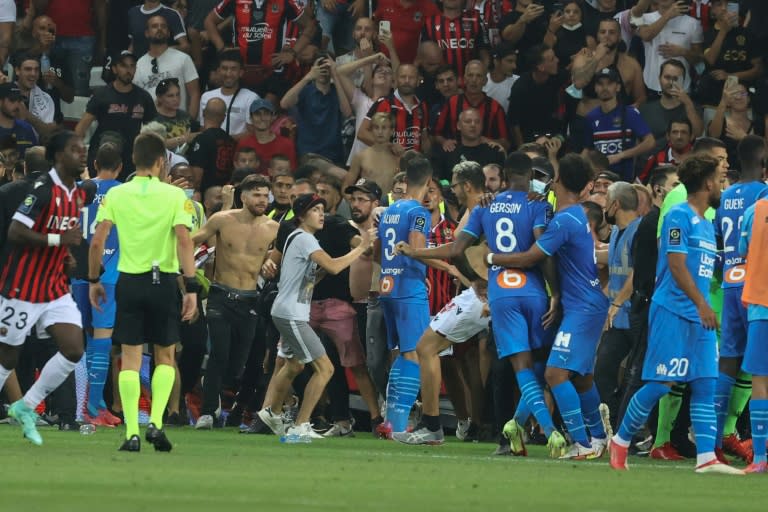 Local authorities in Nice have opened an investigation into the ugly incidents which led to the abandonment of Sunday’s Ligue 1 match between the home side and Marseille, while politicians in France called for punishments to be meted out to those responsible.

The public prosecutor in the southern city confirmed it had begun a probe but said no arrests had been made after Nice supporters invaded the pitch and angrily confronted Marseille’s Dimitri Payet, who had thrown a bottle lobbed at him back into the crowd, before a brawl broke out involving players and spectators.

The French league (LFP) released a short statement saying it had summoned the two clubs to a hearing on Wednesday “following the serious incidents”.

The hosts were leading the Mediterranean derby 1-0 through a Kasper Dolberg goal when the game was interrupted in the 75th minute at the Allianz Riviera as Payet fell to the ground after being struck by a bottle thrown from the crowd as he went across to take a corner.

The former France international threw a bottle back into the crowd as team-mates came across to remonstrate with Nice fans packed in behind the goal.

Some supporters then streamed onto the pitch and a melee ensued involving players and staff from both teams, fans and stewards. Marseille coach Jorge Sampaoli had to be restrained by members of his own staff.

The match was halted for more than an hour and was finally abandoned just before midnight local time after Marseille refused to return to the field of play, with club president Pablo Longoria complaining that the safety of his players “could not be guaranteed”.

It now remains to be seen what action will be taken by the league, which must decide whether to replay the game or award Nice a victory on the basis that Marseille forfeited the match by refusing to return to the pitch.

“What really sparked things off unfortunately was the reaction of two Marseille players who threw bottles back at the supporters,” claimed Nice president Jean-Pierre Rivere.

There had already been a loud-speaker announcement earlier in the game asking supporters to stop throwing bottles and there were also reports of incidents in the VIP box involving the presidents of the two clubs.

One witness told AFP they had “grabbed each other by the neck and needed to be separated by their bodyguards”.

The incidents are a huge blow for the image of Ligue 1, less than two weeks after Lionel Messi moved to France to sign for Paris Saint-Germain.

It is also a major blow for Nice, a club with big ambitions under the ownership of Ineos, the group chaired by British billionaire Jim Ratcliffe.

The match was attended by over 32,000 fans with spectators allowed back inside stadiums in France after almost all of last season was played out behind closed doors due to coronavirus restrictions.

Now, however, Nice run the risk of having to play several games in an empty stadium again as a punishment, and politicians lined up to call for action to be taken.

“It is of course regrettable given how long we have gone watching matches without spectators in stadiums,” said Roxana Maracineanu, France’s Minister Delegate in charge of sport.

She said those guilty of throwing objects and invading the pitch should be punished “if we can find them…I think there needs to be punishments for the club in question.”

Christian Estrosi, the centre-right mayor of Nice who was at the game, got involved too, tweeting: “Violence is always intolerable. There must be punishments after (the league) has determined who was responsible.”

“The behaviour of some of the supporters was unspeakable but so was that of the Marseille president in the stands and the coach on the field,” he added.

Vincent Trocheck with a Goal vs. Columbus Blue Jackets

Milan beat nine-man Bologna to go top of Serie A