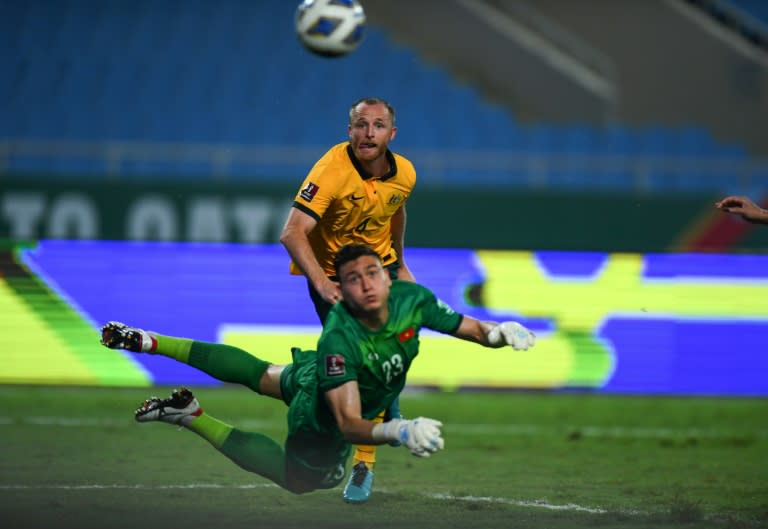 Australia beat Vietnam 1-0 in Hanoi on Tuesday, becoming the first AFC nation to win 10 World Cup qualifiers in a row.

The victory, courtesy of Rhyan Grant’s first-half winner, also left the Socceroos on two wins from two in Group B.

Played behind closed doors because of Covid-19 restrictions, the match at the My Dinh National Stadium was goalless for most of the first half, Graham Arnold’s Australia dominating the ball but coming up against a disciplined Vietnam defence.

Vietnam could have had a penalty in the 27th minute, but VAR ruled Australia defender Grant’s block — of a shot by Nguyen Phong Hong Duy — was not handball.

And it was a Grant header that broke the deadlock in the 43rd minute, the right-back scoring his first international goal off an Ajdin Hrustic assist.

From then on, the home team struggled to get a decent shot on goal.

Australia did have the ball in the net in the second half, but substitute Mitchell Duke’s strike was ruled out for offside.

It also means they still have no points in their first appearance in the final round of Asia’s World Cup qualifiers, having lost 3-1 away to Saudi Arabia last week.

Australia are on two wins with no goals conceded, following last week’s 3-0 victory over China in Doha.

The Socceroos will play Oman next on 7 October, while Vietnam will face China.

There are two groups of six nations in the final round of Asian qualifiers for the 2022 Qatar World Cup.

The top two teams from each group will qualify for the tournament next year while the third-placed teams can still hope to make the cut via an inter-continental playoff.

Opinion: As Derek Jeter enters baseball's Hall of Fame, let's not forget his game was worthy of his name