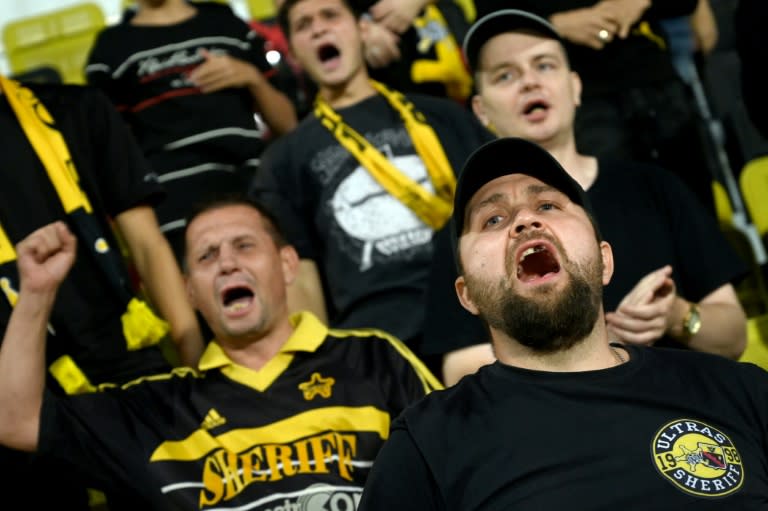 Fans of European giants Real Madrid and Inter Milan will see their teams face unusual competition this autumn: a club from a tiny separatist region in one of Europe’s least known countries, Moldova.

After a couple of failed attempts, Sheriff FC are making their debut this week as the first club from the ex-Soviet country to reach the group stage of the Champions League.

But their historic success is highlighting divisions in the wake of a brief civil war after the collapse of the Soviet Union, which resulted in the creation of Transnistria.

The tiny breakaway state has its own currency, border police, army and cellular network but is not recognised internationally, allowing Sheriff to continue playing in the Moldovan league.

The Moldovan football federation celebrated the qualification as “EUROFANTASTIC!!!”, a sentiment echoed by sports blogger Sandu Grecu, who called it a “massive achievement for Moldovan football.”

Not everyone is so thrilled.

“The team represents a separatist enclave where corruption, smuggling and shadow economy deals are rife, which directly damage the budget and state interests of the Republic of Moldova.”

The Champions League place, he said, will only benefit the owners of Sheriff — “and nothing more”.

Founded in 1997, the young club based in the breakaway region’s administrative hub, Tiraspol, have been on a steady climb into the limelight.

They have won six straight Moldovan league titles and 19 out of the last 21.

“Honestly, I didn’t expect it,” the 55-year-old Ukrainian told AFP. “It’s a fairytale”.

He acknowledged there were political overtones to the moment, but was upbeat about the opportunity it presented.

The games, he said optimistically, “will probably unite” fans in Moldova and Transnistria.

Since 2009, the side have played four times in Europe’s second-tier competition, the Europa League, and have twice been eliminated in the Champions League qualifying rounds.

It’s a significant sum for a team whose entire squad is valued at just 12 million euros ($14 million) and are dwarfed by their Group D rivals.

At weekend training, the team were looking past their first Champions League game with Shakhtar Donetsk on Wednesday to their encounter with Real Madrid later this month.

The Sheriff pair are part of a multi-national line-up. In a league game Sunday, the club fielded three Brazilians, two Greeks, two Colombians, one Peruvian, one Guinean, one Ghanaian, one Luxembourger and zero Moldovans.

The players do their research before coming to the little-known pro-Russian breakaway state.

Gustavo Dulanto, a 26-year-old Peruvian defender, messaged the team’s captain Frank Castenada on Instagram and Googled Sheriff FC before coming to a separatist sliver of land one-fifth the size of Wales.

Yet the politics are inescapable. The club is owned by the Sheriff conglomerate that has an economic and political monopoly in Transnistria.

Founded by two Soviet police officers, the company is shrouded in allegations of corruption.

In Tiraspol, a city of about 130,000 people, Sheriff’s logo is everywhere: supermarkets, gas stations, even a casino. One of its co-founders, Viktor Gushan, is Sheriff FC’s president.

Serghei Pascenco, a 38-year-old backup goalkeeper who was born in Tiraspol and has been with the club since childhood, said the Champions League was always “our president’s dream”.

“Even more people will find out that there is this unrecognised country,” the 61-year-old says of Sheriff’s qualification.

But Troshchinsky was less confident in his side’s Champions League chances.

“We were working towards this 20 years. In another 10 years maybe we make it out of the group stage,” he joked.

Report: Celtics could have interest in Bulls’ Zach LaVine in 2022

Yankees shift Gleyber Torres to second base, which could be his spot for remainder of season