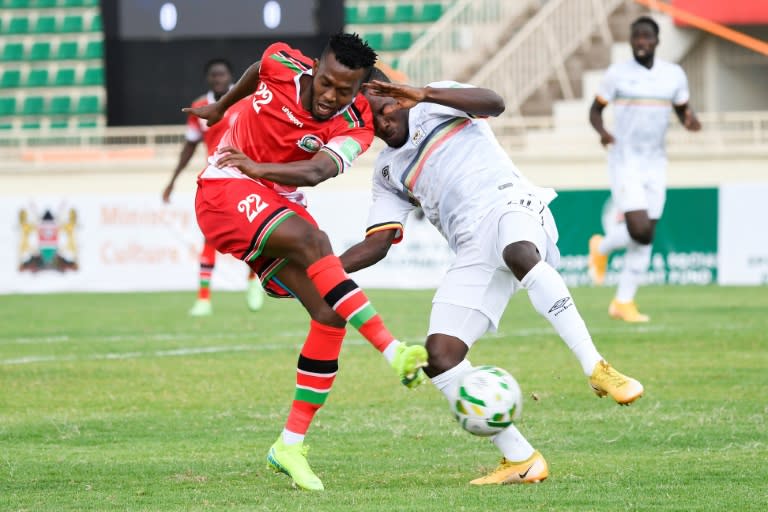 Islam Slimani scored four goals as Algeria equalled the widest winning margin for an African World Cup qualifier by crushing 10-man Djibouti 8-0 in a Group A rout on Thursday in Blida.

The Lyon forward netted twice in each half and the other scorers for the Desert Foxes were Ramy Bensebaini, Baghdad Bounedjah, captain Riyad Mahrez and Ramiz Zerrouki.

Slimani and Zerrouki were promoted by coach Djamel Belmadi in the only changes from the team that beat Senegal 1-0 in the 2019 Africa Cup of Nations final in Cairo.

Victory stretched the African record for an unbeaten run by a national team to 28 matches with Algeria last losing away to Benin in October 2018.

Djibouti began the match as rank outsiders, lying 152 places below Algeria in the world rankings, and had defender Batio Mohamed Youssouf sent off midway through the first half having conceded once.

Burkina Faso, widely regarded as the only threat to Algeria, scored twice within three minutes through Lassina Traore and Mohamed Konate to defeat Niger 2-0 in Moroccan city Marrakesh.

Niger had to play the home fixture at a neutral venue because they are among eight countries, including Burkina Faso, whose stadiums were declared unfit to host World Cup fixtures.

Meanwhile, goals from Nayef Aguerd and Abuaagla Ahmed, who put the ball into his own net, earned Group I favourites a 2-0 win over Sudan in Rabat.

Collecting maximum points took the Moroccans to the top of the table, two points ahead of Guinea and Guinea-Bissau, who drew on Wednesday.

Democratic Republic of Congo, who are among the 10 top seeds, could only draw 1-1 at home to Tanzania in Group J in the southern city of Lubumbashi.

Appearing for the Congolese after a three-year absence, 35-year-old Dieumerci Mbokani scored after 23 minutes for a country that featured at the 1974 World Cup when called Zaire.

But the lead lasted just 13 minutes before Simon Msuva scored his second goal of the qualifying campaign to equalise, having netted in a preliminary match.

The stalemate allowed Benin to become leaders of the section a few hours later thanks to a 1-0 victory over Madagascar in Antananarivo.

Former English Premier League forward Steve Mounie scored the match-winner midway through the first half to give Benin a lift after recently failing to qualify for the upcoming Africa Cup of Nations.

The centre-back headed in a Deon Hotto free-kick during the opening half, but had the misfortune of seeing a rebound off the post strike him and trickle into the Namibian net after half-time.

Namibia hosted the match in Soweto on the outskirts of Johannesburg because no stadium in Windhoek met international standards.

A much anticipated east African showdown in Group E between Kenya and Uganda failed to meet expectations and ended in a dour 0-0 deadlock, leaving Mali first after a win over Rwanda the previous day.

Kenyan Hassan Abdallah should have done better with an early header, that ended well off target, and Ugandan Joseph Ochaya became so frustrated that he attempted to score from near the centre circle.

Matchday 1 will be completed on Friday with seven more matches, including Nigeria hosting Liberia in Lagos and South Africa confronting neighbours Zimbabwe in Harare.

Red Sox vs. Astros: 10 storylines to watch in ALCS Game 6

WATCH: Are Kyrie Irving and Kevin Garnett the most talented to play for the Boston Celtics?

Morey is magnifying the Simmons saga