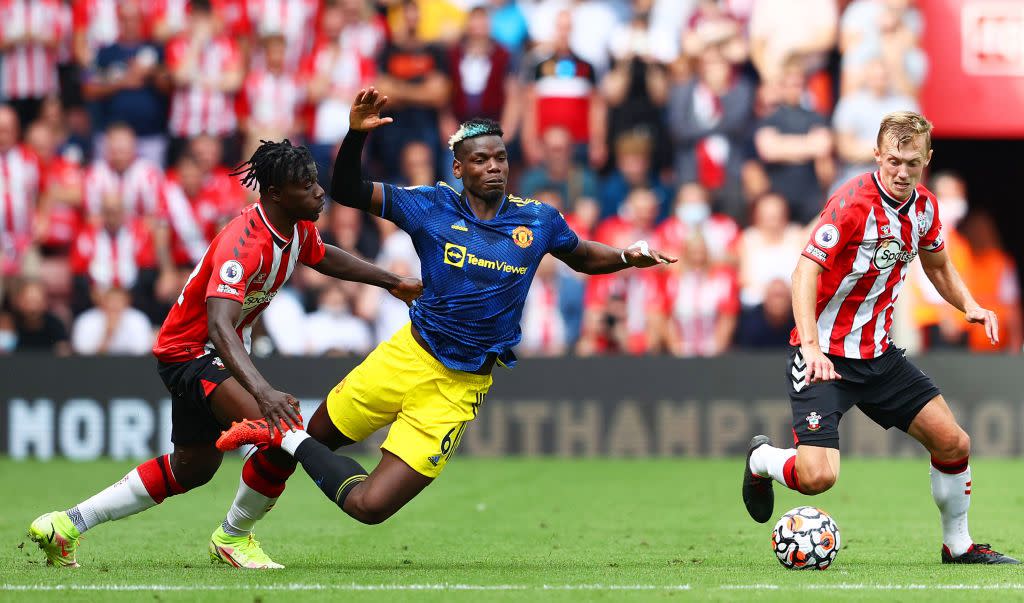 Southampton vs Manchester United ended even at St Mary’s as the Saints held on for a credible draw against the red-hot Red Devils.

A first half own goal from Fred gave Southampton the lead but Mason Greenwood equalized in the second half to set up a tight finish.

Despite a few scares, Southampton held on and new forward Adam Armstrong had a few chances to grab a win.

All in all, Southampton will be much happier with this point as Ole Gunnar Solskjaer’s side couldn’t conjure up any late heroics.

1. Pogba shows his class: He dragged United back into this game and was the reason they grabbed a point. His poise on the ball was excellent, he made the equalizer for Greenwood and was a constant threat. This is the Paul Pogba we all know and love. No matter what happens with his contract situation, let’s enjoy Pogba in the PL while we can.

2. Saints dig deep: A lot of people are tipping Southampton for relegation after losing Ings, Vestergaard and Bertrand this summer. But some of their new signings look superb. Adam Armstrong should have scored a winner late on and never stopped running. Tino Livramento, 18, was excellent at right back, and Romain Perraud looked assured at left back. Ralph Hasenhuttl is putting his faith on youth and based on this performance alone, Saints should be fine this season.

3. Unbeaten away run continues: Solskjaer’s side have now equalled the English top-flight record for most away games unbeaten in a row (27) and they showed their solid core. There were a few issues in giving the ball away cheaply against Southampton’s press, but they weren’t punished. With Raphael Varane in soon, that should help them stay focused at the back and keep this run going.

Man of the Match: Paul Pogba – Could have won it with a chance he had and he led by example as United surged back in the second half to get a point.

Early on Southampton had a few set piece opportunities, while United looked dangerous from theirs as Mohammed Salisu somehow cleared after Harry Maguire hit the crossbar with a header.

Just as United started to get a grip on the game, Southampton took the lead.

Jack Stephens won the ball off Bruno Fernandes, who wanted a foul, but play was waved on and Adams had a low shot from the edge of the box which deflected in to send St Mary’s wild.

Before half time Nemanja Matic was free at a corner but his low header was saved by Alex McCarthy.

In the second half Manchester United kicked on and soon equalized.

Paul Pogba and Bruno Fernandes combined to set up Mason Greenwood and his scuffed shot snuck underneath Alex McCarthy and in.

Pogba then grabbed the game by the scruff of the neck as he poked an effort just wide.

Greenwood then flicked a header onto the top of the net as Jadon Sancho came off the bench and made a real difference. And McCarthy saved a header from Fernandes as Southampton tried to dig in and hold on.

They ended up doing more than that.

Adam Armstrong almost put Southampton back in front as their high-press caught out United but the new star striker for the Saints hit his shot straight at David de Gea and from the resulting corner he couldn’t flick a header towards goal.

In the end, a draw was a fair result as United ran out of steam and Southampton looked the more likely to grab all three points late on.