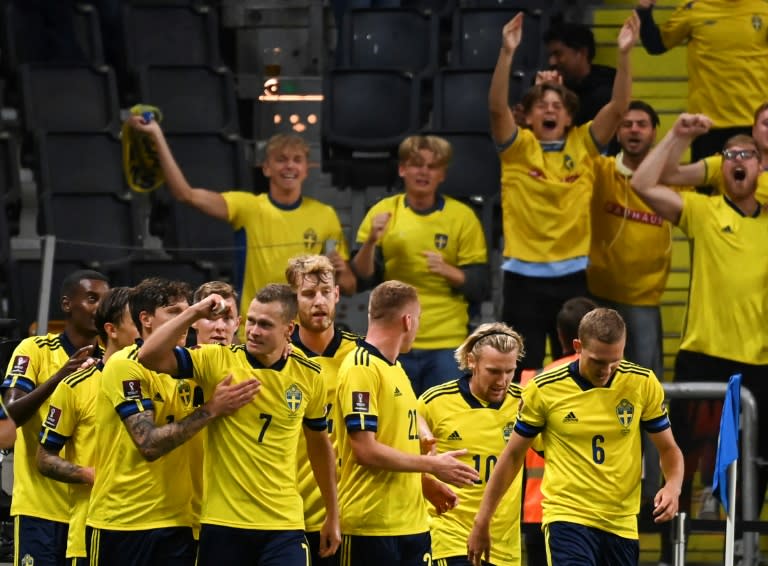 Viktor Claesson secured Sweden a 2-1 victory over Spain in World Cup qualifying on Thursday for a third win in three games and top spot in Group B.

Claesson grabbed the winner just before the hour as Sweden kept their 100 percent record intact to move two points clear of Spain with a game in hand.

“I think we’re better than what we ourselves believe, honestly. We could have won the match by a lot more. I’m proud. We’re a really good team,” said Sweden winger Dejan Kulusevski.

Defeat for Spain leaves Luis Enrique’s side at increasing risk of entering the play-offs with only the group winners guaranteed a place at the 2022 finals in Qatar.

“We didn’t deserve to lose,” said Spain defender Jordi Alba. “The first half was excellent and it was a shame that they equalised immediately.”

“We have no margin for error now,” he added. “We need to improve things. There’s still a lot to play for, difficult matches — and we need to win them.”

Spain return home to face Georgia on Sunday having made an unconvincing start to the group. The 10 group runners-up will head into the play-offs along with two teams from the Nations League.

The game started promisingly for Spain in front of some 16,000 fans in Sweden as Soler steered in Alba’s cross on the half-volley.

But Soler was partly at fault for Sweden’s equaliser, his pass getting away from Sergio Busquets and allowing Isak to steer in superbly from the edge of the area.

The two nations drew 0-0 in the group stage of Euro 2020, but this was a far more open affair as the pace of Isak, Kulusevski and Emil Forsberg kept the Spain defence on alert.

Juventus attacker Kulusevski, who missed the game against Spain at the Euro after testing positive for Covid-19, had a drive turned away by the foot of Unai Simon.

Sweden goalkeeper Robin Olsen kept the scores level just after half-time when he bravely palmed away as Ferran Torres and Alvaro Morata both sought to apply a finishing touch from close range.

Spain’s inability to clear a corner proved their undoing on 57 minutes.

After a deep cross, the ball was worked back to Claesson who sneaked a low shot between Simon and the near post, notching the decisive goal for the second time in three qualifiers.

Now in pole position in the group, Sweden play Uzbekistan in a friendly this weekend before resuming their qualifying campaign away to Greece on September 8.

Lucas Meek on Washington's supporting cast shining in win versus CSUF: 'This was awesome'