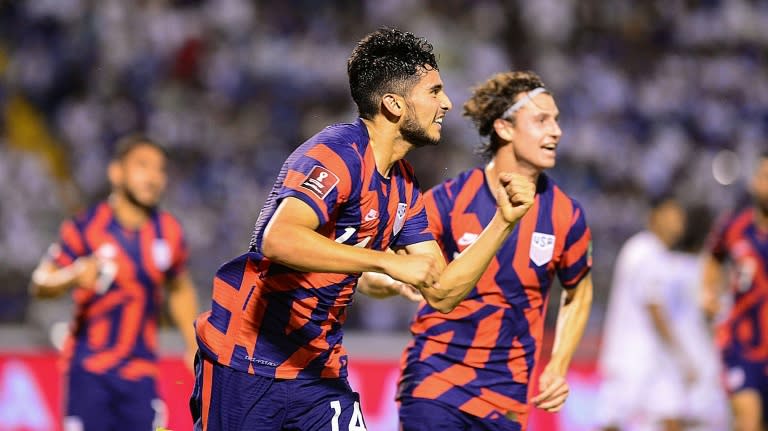 Teenage striker Ricardo Pepi inspired a second-half fightback as the United States came from behind to defeat Honduras 4-1 in a hard-fought CONCACAF World Cup qualifier on Wednesday.

FC Dallas 18-year-old Pepi scored a crucial header to fire the US into a 2-1 lead and had a hand in three more goals to give the Americans their first victory of CONCACAF’s final round of qualifiers after two opening draws.

US coach Gregg Berhalter’s team had been outplayed in a lacklustre opening 45 minutes that saw Honduras take the lead through a Brayan Moya header on 27 minutes.

But Berhalter rang the changes at half-time, bringing on Antonee Robinson, Brenden Aaronson, and Sebastian Lletget and switching to a more adventurous 4-3-3 formation after starting the game with an unfamiliar 5-2-3 line-up.

The switch paid immediate dividends, with Robinson equalising in the 48th minute with a cushioned finish after Pepi’s decoy run to the near post distracted the Honduras defence.

Former Mexico youth international Pepi then headed the US into the lead on 75 minutes after DeAndre Yedlin’s superb cross from the right flank to make it 2-1.

Pepi then set up an 86th minute goal for Aaronson, squaring to the Red Bull Salzburg forward who finished with aplomb to make the game safe.

There was still time for Pepi to be involved in the fourth US goal, his low shot parried by Honduras goalkeeper Luis Lopez into the path of Lletget, who tucked away at the far post.

The second half display delivered a badly needed three points to Berhalter, who had gambled with an untested starting line-up in a game that had acquired must-win status after opening draws against El Salvador and Canada.

For long periods of the first half, it looked as if Berhalter’s tactical experiment was about to end in disaster, with Honduras over-running the US midfield and taking a deserved lead midway through the half with the American defence rocking.

But Berhalter’s raft of changes at half-time turned the tide back in favour of the US, who had started the game without injured Borussia Dortmund star Gio Reyna and the suspended Juventus Weston McKennie, sent home after breaching Covid-19 protocols.

The only blemish on a superb second-half display was an injury to Chelsea star Christian Pulisic, the US skipper hobbling off early in the 62nd minute.

The win leaves the United States third in the eight-team CONCACAF qualifying standings after three games with five points.

In other games Wednesday, Costa Rica drew 1-1 with Jamaica in San Jose.

Frankie Montas continues to establish himself as the Athletics' ace