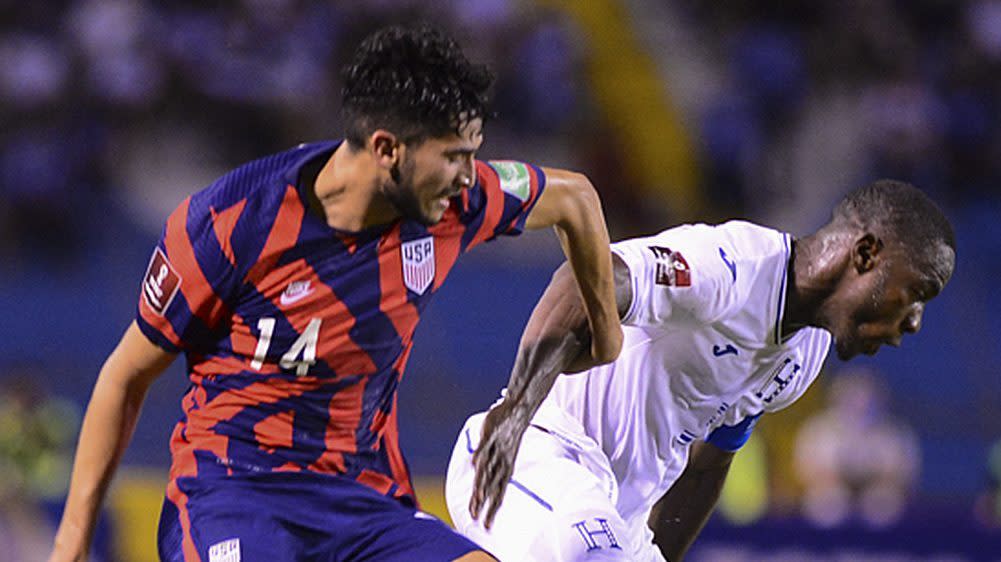 You may never, ever see player ratings as wildly different as this batch of USMNT marks out of 10 from a 4-1 comeback win over Honduras in San Pedro Sula.

Gregg Berhalter started four players for their first World Cup qualifier: Two struggled mightily, one was just okay, and one… well, he might’ve saved the confidence of making Qatar 2022.

Eighteen-year-old debutant Ricardo Pepi scored a goal, assisted another, and the FC Dallas phenom was a big part of the other two after the USMNT looked dead at halftime.

Christian Pulisic was injured, John Brooks was awful, Antonee Robinson was terrific, and Matt Turner made a save that no one should forget anytime soon (and especially not if we’re watching the Yanks in Doha come December 2022).

GK – Matt Turner: 7 – Saved a point with a terrific diving slap with 20 minutes left. Sounds wild, but it might’ve saved his coach’s job

CB – Mark McKenzie: 6 – Got stronger late after a dicey start that was not aided at all by normally strong John Brooks.

CB – John Brooks (Off HT): 4 – He’s their best center back by some distance but he’s been dreadful and slow for 135 minutes. He especially can’t charge out with a kid next to him.

CB – Miles Robinson: 7 – A warrior. Played through an injury to deliver the goods for a unit that looked nothing like the first conceded goal would be the only one.

RWB – Tyler Adams : 6.5 – He’s played everywhere for RB Leipzig, so playing him on the right is only weird in that Berhalter played Sands in the middle of the park.

CM – James Sands (Off 73′): 4 – Another player who shouldn’t be slighted for being put in a huge position without any comparable senior experience — and without Tyler Adams as a security blanket.

CM – Kellyn Acosta: 5.5 – He’s not Weston McKennie, but the drop-off wasn’t incredibly steep as the Colorad Rapids man continues to make himself an important part of the roster.

LWB – George Bello (Off HT): 3.5 – It feels awful to grade the kid, who had no business starting at San Pedro Sula in his first World Cup qualifier. The minute Brooks charges out of a position, an experienced left back/midfielder is racing to cover. Whoops.

RW– Christian Pulisic (Off 62′): 7 – The CONCACAF tactical plan of fouling the ever-loving heck out of the Chelsea star may make Thomas Tuchel respectively ask the American to, y’know, stop showing up for the USMNT unless absolutely necessary. One of the only bright sparks of the first 45 minutes, he left injured after helping to deliver the equalizer.

LW– Josh Sargent (Off HT): 4 – A single good header back into the mix. Looks lost.

CF– Ricardo Pepi: 9 – For an 18-year-old with zero caps and no game time in almost two weeks to be arguably the best player on the pitch while contributing to all three goals in a must-have comeback win is bonkers.