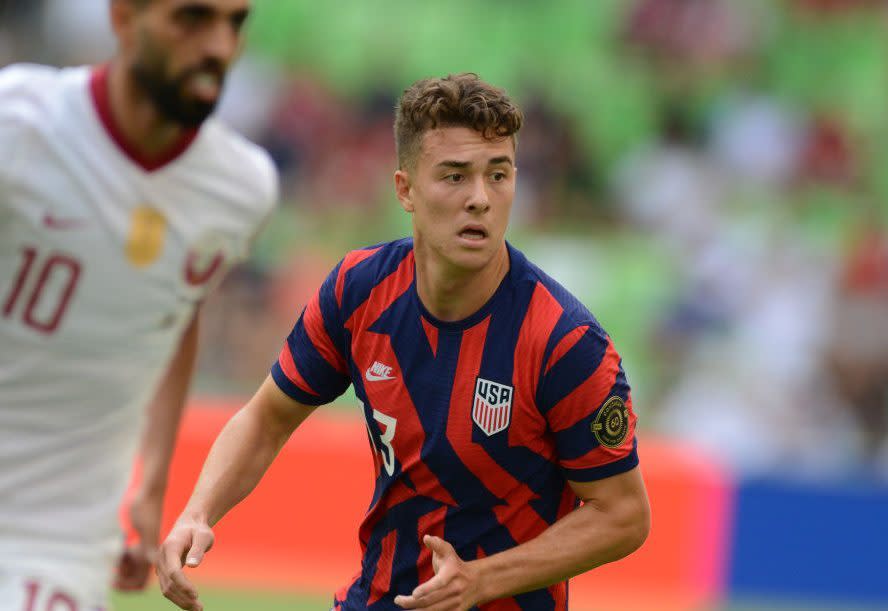 All three aren’t in the USMNT squad for their 2022 World Cup qualifiers, which kick off this week, and in the case of Richards and Hoppe it is probably because they knew moves were on the horizon.

Let’s round up some of the latest transfer possibilities for these young American players in the final hours of the window.

Chris Richards is reportedly heading back to Hoffenheim on loan for this season, as the young American defender will not be a key member of Bayern Munich’s first team squad.

Richards, 21, spent the second half of last season on loan at Hoffenheim and excelled as a regular for them.

According to a report from Sport1 in Germany, Richards created a great impression at Hoffenheim and some Premier League clubs were interested in signing him this summer. A separate report from CBS says that Richards will also sign a new long-term contract at Bayern Munich as part of the deal which sees him head out on loan to Hoffenheim.

This move will suit everyone, as the USMNT need to add more depth and options at center back and Richards, with his supreme ball-playing ability, is one of Gregg Berhalter’s big hopes in that position. The FC Dallas academy product has a big personality and Hoffenheim like that about him, as well as his play on the pitch.

Another USMNT center back who could be grabbing a move is Cameron Carter-Vickers, 23.

The Tottenham Hotspur center back played a lot in preseason for Nuno Espirito Santo’s men but did pick up an injury in recent weeks.

He has recovered fully from that and a report from our partners in the UK at Sky Sports says that Celtic want to sign him on loan, but Spurs would prefer a permanent move. Another report from Eurosport states that Newcastle United want to add CCV and have been interested in him all summer.

After previous loan spells at Swansea City, Stoke City, Luton and Bournemouth in the Championship (he missed out on promotion to the Premier League with Bournemouth last season in the playoffs), Carter-Vickers has one year left on his current Tottenham contract.

This will be the biggest move of his career so far and it is a huge opportunity for the defender to prove he can play week in, week out in the Premier League or at a club like Celtic who are in the Europa League.

Newcastle like to play with three central defenders so CCV should get plenty of minutes there. He was highly thought of by Mauricio Pochettino when he was Tottenham’s boss, but that was a while ago now and the Spurs academy product needs to stand tall and give Berhalter another option at center back.

USMNT forward Matthew Hoppe, who had a great tournament in the Gold Cup this summer, is close to sealing a move to Real Mallorca from Bundesliga giants Schalke.

Hoppe, 20, had a great first season in the Bundesliga in 2020-21 but Schalke were relegated and it seems like he’s now heading to La Liga as he’s one of the only players who the cash-strapped club can sell this summer.

According to a report from Diario de Mallorca, the California native is available for as little as $3.5 million and Real Mallorca are in talks with Schalke over a deal.

It is believed the American owners of Real Mallorca (led by Robert Sarver, with the likes of Steve Nash and Stu Holden as minority owners) are keen to push the deal over the line.

Hoppe is a versatile forward who can play centrally or out wide and he was impressive in the Gold Cup success this summer. After becoming the first-ever American to score a hat trick in the Bundesliga last season, he was linked with moves all across Europe but this one could work out very well.

He will likely get regular minutes at La Liga new boys Mallorca and the Spanish side have started the season very well as they sit in sixth place with two wins and a draw from their first three games. USMNT fans, start arranging your away day trips to Palma…